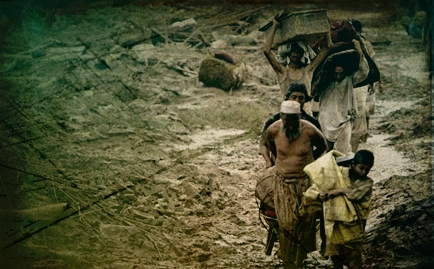 God Has Not Forgotten Your Pain

During the month of August, the worst flooding in Pakistan’s history took place, leaving millions homeless and thousands dead. But in America, the press coverage was minimal (at best). We decided to try to find out what’s happening in Pakistan, so we talked with Christophe Lobry-Boulanger, a disaster relief expert with the American Red Cross. He spoke about the current situation, what the Red Cross is doing and what the long-term plans are.

What is the situation like in Pakistan right now?

The disaster situation is evolving and getting worse. The flooding was the
consequence of the monsoon, which is normal in Pakistan, but this time
it was much, much worse and actually is still worsening as we speak now.
Basically if you look at the situation over the past four weeks or so, the
disaster has been evolving from the northern part of Pakistan to the
central part of Pakistan, and now to provinces in the southern part of
Pakistan. If we speak about numbers, about 18 million people are
affected by these floods, which is about 10 percent of the population. [More than 1] million people have been rescued, literally, and about the same
number of homes have been either destroyed and affected. In terms of
casualties, I think we’re just below the 2,000 mark—1,600 or 1,700
deaths. This is the human cost, but it’s important to know that the
livelihood of people is also destroyed, so this is not only lives
that we’re talking about, but fields and extraordinarily vast amounts of
the country. In terms of agriculture, fields and means of livelihood of
people have been destroyed as well as cattle. Over a million cattle
have died as a consequence of the disaster.

I was in Haiti as part of the relief efforts in February of this year,
and I do find some differences and I find also some similarities. What
is similar, for instance, is that both the natural disasters [are] affecting
extremely poor populations. In Pakistan when you go to the countryside,
those people are extremely poor. If we speak about the regions away
from the urban areas, those people really have nothing to live with.
And then on top of it, if you put the flood; it’s really hard to
imagine the people who have survived, whether they were poor like this
before the flood or as a consequence of the flood. As in Haiti, the
effect on the population is even worse because those people had nothing
to begin with and therefore an even less position to really respond to
the disaster or even be prepared for this kind of thing.

How are the people reacting?

I think it depends [on] whether you speak about the northern part of
Pakistan or the southern part of Pakistan. The waters have started to
recede in the northern part of Pakistan and we can see some population
trying to come back to the villages now and trying to rebuild their
life. On the other hand, when you look at the villages they are coming back
to, they have nothing. The landscape is destroyed and the houses and
the structures are gone, and they are really starting from scratch
again. In the southern part, it is really a matter of life and death
and they’re trying to remain alive by watching the waters still rising,
still rising, still rising.

It seems like, at least in the States, the Pakistan flooding has received
little to no media coverage. What is your reaction to the minimal news
reports coming out?

Actually, I haven’t been in the States for a while now, so I’m not very aware of what’s going on in the media in the States. What I can say, though, is
that it is a disaster of a magnitude that should be put on a stand. The
U.N. has repeatedly said, and rightfully so, [that] if you want to scale the
magnitude of this one, it is bigger than the Haiti earthquake, the
tsunami of 2005 and the Kashmir earthquake combined. It is enormous, affecting between 18 and 20 million people, and spanning the whole
length of the country. So you can imagine the catastrophe that really
spans the whole region and affecting just under 18-20 million people.
It’s enormous, and the response of it is going to take months.

What is the long-term development plan for the country? Specifically, what
is the Red Cross doing over the next 18 months to make sure Pakistan
can get back on its feet?

Let me try to give you an answer and categorize it differently. The
Pakistani Red Crescent [editor’s note: the Red Cross and Red Crescent
are parts of the same whole] is basically at the center of the
operation. They have already provided food items to about 66,000-67,000
families, which is just below 500,000 people, and they have provided
relief supplies, non-food items, to about 29,000 families, which is just
below 200,000 people. In addition to that, they provide water and
sanitation to between 95 and 100,000 people. It could be restoration of
wells, it could be our distribution centers to people, water-purifying
tablets and so on. And then from the medical standpoint, they have, I
think, 32, over 30 medical units throughout the country, which provide
health services to just below 100,000 patients in the affected people.

[We are also] in the process of raising 72-72.5 million dollars, and their
plan is to assist 900,000 people, which is about 137,000 families, for nine
months. This is the immediate response aspect of the operation.

In terms of recovery for the long-term, I know that there is a team, part
of the Red Cross federation team, which is exactly addressing this
question of long-term recovery and recovery of what we call livelihood.
They are working on the plan that is going to be implemented for the
many months to come. They are the ones, basically, which provide the
transition between the response aspect of the operation, addressing the
basic needs—food, water, medical needs—and the long-term needs—housing, infrastructure and livelihoods, providing assistance to people
in terms of their own livelihood, for instance, with cattle, with
growing again some crops which will be able to sustain their own
livelihood.

France Under Scrutiny for Expulsion of Roma