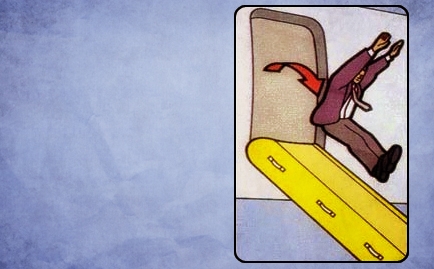 By now, everyone’s heard the story. Last week, following a particularly stressful flight from Pittsburgh to JFK, JetBlue flight attendant Steven Slater hit the “take this job and shove it” breaking point we’ve all been so perilously close to, let slip a tirade of obscenities, grabbed a couple beers for the road and slid down the emergency slide into Proletarian folklore.

Since then, the shine has been taken off the story by revelations that Slater seemed rude and irritable during the flight, that the offending passenger in question was not so offensive and may not even have existed, and that the entire stunt may have actually been a choreographed ploy for Balloon Boy-like reality stardom. But last week, Slater was a hero to all of us (or at least to the Internet). Even if the entire story was a fabrication, we so deeply wanted it to be true. Slater was the personified wish fulfillment of anyone who’s ever worked in the service industry and been at the wrong end of ill-tempered customers. He did what all of us have dreamt of, and he did it with a panache few of us could probably even cook up in our wildest fantasies.

In the media frenzy to find out everything about Slater, one key detail was overlooked. What about the woman who allegedly sent this 20-year airline veteran careening over the edge? Certainly, after two decades of reminding huffing businessmen to return their tray tables to the upright position, politely disposing of vomit bags and listening to screaming toddlers, Slater had to have dealt with some difficult individuals. Who could this absolute quintessence of poorly mannered, entitled narcissism be? In the public mind, she took on the form of every stuck-up customer any of us have ever served, and it seemed likely she spent her free time stealing the souls of orphans, clubbing seals for sport and working as a “let’s pretend everything is OK” consultant for BP. Of course, the painful reality is that we are all this person.

At the very least, we have been at one point or another. What we all seemed to forget with our rallying cries of support for Slater sticking it to the Man is that nearly all of us have been the poorly mannered, entitled narcissist in our dealings with people who are serving us. It’s easy to feel wronged when we’re serving someone who treats us like garbage, but it’s equally easy to forget that the person serving us might have those same feelings. Our default tendency seems to be to treat those we see as beneath us as subhumans.

Even those of us who have worked in the service industry can be remarkably insensitive when being served. Perhaps it’s some kind of bizarre trickle-down effect. We’re treated poorly by those above us, so we vent our impotent frustration on those below us. Somewhere out there must be a person at the absolute rock-bottom of the service industry who has no inferior caste members to kick around, and has to work out his anger by throttling inanimate objects.

No matter how nice a person we are in every other aspect of life, few of us seem immune to the occasional bout of rudeness toward those in the service industry. Definitely not exempt from this list are Christians. Ask anyone who has worked as a waiter or waitress, and you invariably hear that church crowds are the absolute most difficult to deal with. We’re demanding, short-tempered and we tip poorly. How can this be when we, above all others, are called to be servants? When Jesus flat-out tells us that people who exalt themselves will be humbled, and those who humble themselves, exalted?

It comes down to the sin that seems the absolute easiest to fall prey to, and the one seldom taken very seriously in the Church: pride. If we’re honest with ourselves, there’s a hidden part of us that really thinks we’re more important than everyone else. That we deserve to be catered to. This is especially apparent when we receive bad service. It’s one thing to stand up for the poor, hard-working guy who gets treated badly with no apparent cause. It’s quite another to maintain a Christlike attitude when no one comes by to take your drink order. Yet, it’s every bit as imperative. Jesus called us to be His image to those around us, and especially to those society does not value. We are not relieved of this duty just because the waitress at Denny’s messed up our bill.

Many people will try to defend their attitudes toward those in the service industry by saying servers are paid to serve, and that there is a minimum standard we should expect of them. That may be true to a point, but how much of our vitriol toward poor service is some kind of altruistic defense of the industry standards, and how much is just our deep-seated sense that we are special and deserve to be treated as such?

Here’s a sweeping statement that I have no trouble standing by: If you’re nice to your friends, but a jerk to the guy who got your coffee order wrong at Starbucks, you’re actually just a jerk. The way we treat people the world would see as beneath us reveals our character. Moreover, rudeness, impatience and intolerance toward the people serving us isn’t just a minor character flaw. It’s a flat-out sin.

It may sound elementary, but the people serving us are humans. They have goals, hobbies, loved ones, stresses, fears and, most importantly, feelings. It may be hard to swallow, but many of them are also smarter, more competent and nicer than us. When we’re wronged, or treated without sensitivity or consideration, it wrecks us. The person behind the counter at McDonald’s is no different. As anyone who has worked in the service industry can tell you, one terrible encounter with a customer can ruin an entire day. God forbid that encounter come at the hands of someone who professes to be a Christian.

Steven Slater may be a phony. Only time and the insatiable 24-hour news cycle will tell for certain. But the incident has taught us something. We’ve all had times where we’ve been pushed so far to the breaking point by inconsiderate people that we’ve dreamt of taking that big inflatable slide to freedom. And we’ve all been the person who made Slater do just that.