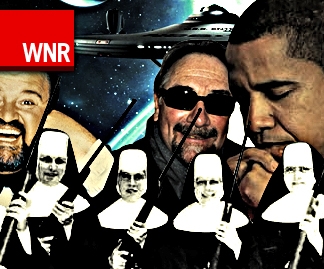 The first week of May, 2009, calmed down a bit. After the swine flu panic of last week, this week seemed fairly tame by comparison. However, swine flu did claim the life of a young woman in Texas, a legendary comedian passed away and the National Day of Prayer brought controversy along with it. Calm though it may have been, these stories and more made the first week of May one to remember.

Now that the new Star Trek movie has opened (and possibly created a whole new generation of geeks), scientists are taking a look at the technology behind the Enterprise. Years ago, that pesky Einstein said that faster-than-light travel was impossible (that whole, “you can’t create infinite energy to move infinite mass” thing).  Well, stuff it Einstein, because scientists are saying that the warp technology of Star Trek may not be impossible. OK, “not impossible” isn’t exactly the same as, “Let’s fly to Alpha Centauri this week,” but we can dream.

Veteran jovial funnyman Dom DeLuise passed away this week at the age of 75. The jolly comedian was also a chef and author, who wrote several cookbooks and children’s books. He was also a perennial Burt Reynolds sidekick. That’s an impressive resume for anyone.

After a 500-year male-only history, the Vatican’s elite Swiss Guard may allow women to join its ranks. Daniel Anrig, commander of the Swiss Guard, said, “I can imagine them for one role or another. Certainly we can think about this.” It sounds a bit noncommittal, but even the consideration marks an enormous change for the elite corps. The guard formed in 1506 under Pope Julius II, the “warrior pope.” Sounds pretty impressive. Unfortunately, the guard dress in flamboyantly striped puffy uniforms, with sporty red plumes in their hilarious, pointy helmets.

This Thursday marked the National Day of Prayer. The Obama administration raised a bit of controversy around the event by not holding a White House service. Under President George W. Bush, the day was received with a great deal of fanfare. President Bush held an ecumenical service in the White House each year. President Obama signed a proclamation recognizing the day, but did not hold a service. Press Secretary Robert Gibbs explained the move, saying, “Prayer is something that the president does every day. I think the president understands, in his own life and in his family’s life, the role that prayer plays.” Many prominent evangelicals expressed disappointment at the decision, while atheist groups said Obama shouldn’t even have signed the proclamation.

As the swine flu scare begins to wane, the first American citizen lost her life to the virus this week. Thirty-three-year-old Texas teacher Judy Trunnell died after being hospitalized for two weeks. Trunnell was pregnant, and slipped into a coma. Her baby was delivered by Cesarean section, and was healthy. Texas health officials did not confirm that swine flu directly caused Trunnell’s death, saying that she had chronic underlying health conditions.