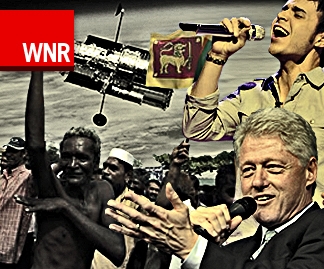 Politics, science, pop culture and a potential humanitarian tragedy. It’s been a very full week. The third week of May 2009 was so full that it’s difficult to summarize, but here are a few of the stories that defined it.

Former President Bill Clinton is back in the political sphere after being appointed a Special Envoy for Haiti. While serving as president, and more recently through his Clinton Global Initiative, the 42nd president worked extensively in Haiti. Haiti is the poorest nation in the Western Hemisphere, and has been buffeted by the rise in global food and oil prices. U.N. Secretary General Ban Ki-moon said of Clinton’s appointment, “I am confident that President Clinton will bring energy, dynamism and focus to the task of mobilizing international support for Haiti’s economic recovery and reconstruction.”

Dark horse candidate Kris Allen took the top prize on American Idol. Of course, if Clay Aiken has taught us anything it’s that second place is the spot to hit. Already, runner-up Adam Lambert is being discussed as the new frontman for Queen. As for Kris Allen, remember Ruben Studdard, Fantasia Barrino and Taylor Hicks? Neither do we.

Hubble Back and Better Than Ever

Remember when the Hubble was the absolute laughingstock of all technology? Billions of dollars spent for pictures that looked like your great aunt using a digital camera for the first time. Still, after a few repairs the beleaguered telescope started to deliver breathtaking images that turned it from a cosmic punchline to a beloved scientific breakthrough. After completing some very difficult repairs (imagine trying to get torque on a socket wrench in zero gravity) and updates, astronauts on the latest Atlantis mission outfitted the Hubble with new instruments that will allow it to gaze to the edge of the observable universe.

The world’s longest civil war, continuing on and off since 1983, finally ended this week with the Sri Lanka military thoroughly defeating Tamil separatists who at one point controlled up to a quarter of the country. The war culminated in the death of Tamil Tiger leader Velupillai Prabhakaran. While the Sri Lanka government has praised its military and painted the Tigers as a brutal terrorist group, the U.N. suspects war crimes on both sides, and is investigating what they have called a potential humanitarian nightmare.

Queen Gets a Wii

Queen Elizabeth II will now be able to keep up her royal physique with Wii Fit. Gaming company THQ gave Her Highness a gold-plated Royal Wii with their new game, Big Family Games. It’s meant to appeal to everyone from kids to grandparents, and the game company figured what better family to start with than the royal one? The game features golf, tennis, lawn dart, horseshoes and bocce. Seems like it ought to include polo, fox hunting and pheasant shooting. Still, we hear the Queen is pretty crackerjack at Mario Kart.

Terminator: Salvation Not So Great

Well, the waiting is finally over. Through profanity-laced tirades and “will he or won’t he” speculations on Arnold’s involvement, the film has been highly anticipated. We’ll let you make up your own mind on the issue, but be warned that initial reviews are pretty abysmal. Who would have thought that a guy whose resume included a couple Charlie’s Angels flicks and The O.C. wouldn’t be able to turn in an awesome Terminator movie?

International Travel for the Uninitiated