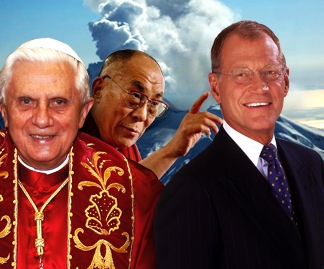 How Do You Go All In With Commitment Phobes?

This week in the news, the "last gunslinger" hangs up his holster, the pope causes more controversy, Clinton shares some blame and the Dalai Lama gets stymied. Those stories and more made the last week of March 2009 one to remember.

David Letterman married his longtime girlfriend Regina Lasko and announced the union on CBS’ Late Show on Monday. Letterman said he and Lasko married in a remote town in Montana. The couple have been together for 23 years and have a five-year-old son, Harry. Letterman said he avoided marriage for more than two decades because, "I secretly felt that men who were married admired me … like I was the last of the real gunslingers." Hopefully the reception was catered by the Hello Deli.

In the latest controversy for Pope Benedict XVI, the pontiff made the claim that condoms deepen the AIDS crisis. In his four years as pope, the German-born Benedict has drawn criticisms from Muslims, Jews and fellow Catholics. Before igniting the current controversy, Benedict was fresh off criticism over lifting the excommunication of several ultraconservative bishops, one of whom denies the Holocaust. The pope has acknowledged mistakes by the Vatican, but said he was saddened by Catholics who openly attacked him when he believes he has a record against anti-semitism.

A peace conference scheduled to be held in Johannesburg, South Africa was postponed when the South African government refused to allow the Dalai Lama to attend after bowing to pressure from the Chinese government. The South African government released a statement saying it had not received a specific demand from Beijing, but did not want to jeopardize relations or be used as a political platform in the run-up to hosting next year’s soccer World Cup. In response, the Dalai Lama apologized for indirectly causing disruption for the event. Being the Dalai Lama, he’s quite even-tempered. So he’s got that going for him. Which is nice.

The long-awaited Farrelly brothers Three Stooges movie is finally on track. The film is not a biopic, but rather an homage to Stooge’s slapstick wackiness, a feat the Farrellys seem well capable of pulling off. The casting choices are a bit odd, though. Sean Penn, known for his hilarious performances in Mystic River and Dead Man Walking will be playing Larry. Benicio del Toro, lauded for his gut-bustingly funny turns in 21 Grams and Traffic will be taking on the role of Moe. Rumored for Curly (arguably the most important Stooge) is Jim Carrey. Carrey would have to gain 40 pounds to play the role. He would also have to practice being hit on the head with a hammer, having his nose twisted with a wrench and being relentlessly gouged in the eyes. The movie has promise, as long as it remains Shemp-free.

Alaska’s long dormant Mt. Redoubt has erupted eight times since Sunday, spewing ash 65,000 feet into the air. The volcano has not erupted in nearly 20 years. Interior Secretary Ken Salazar said the eruptions could continue for weeks or even months. The main concern in the volcano’s eruption is air quality, and seniors and those with respiratory problems have been warned that the airborne ash could cause breathing problems. If the eruptions continue, we have to hope that Tommy Lee Jones and Pierce Brosnan are standing by.

Street Roots: The Voice of the Homeless