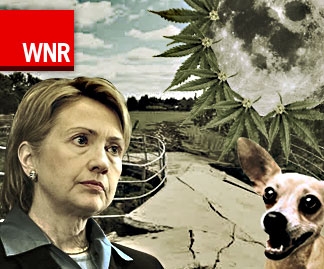 It was a strange week in the news. Most of the current events read like a wacky “News of the Weird” site. From a large but uneventful earthquake in the world’s most novel country, to the passing of a cultural thorn in our side to a verbal slap fight between our Secretary of State and an authoritarian regime, the fourth week of July 2009 was a bizarre one.

Gidget, the insanely irritating spokes-dog for Taco Bell, died this week at the ripe age of 15. The bug-eyed chihuahua appeared in Taco Bell’s ads from 1997 to 2000, and its catchphrase, “Yo Quiero Taco Bell,” embedded itself in popular culture’s skull like a rusty nail from a grisly industrial accident. Gidget also had a role as Reese Witherspoon’s animal accessory in Legally Blonde 2. Even though we know Gidget was an unwitting participant in Taco Bell’s obnoxious advertising onslaught, it’s hard not to feel some animosity toward the poor pooch. Still, she had a good run. Pallbearers at the funeral will include the Geico Gecko, Morris the cat and the Budweiser frogs.

Monday was the 40th anniversary of the Apollo 11 moon landing. President Barack Obama honored astronauts Buzz Aldrin and Neil Armstrong, the first men to walk on the moon, as well as Michael Collins, the poor guy who had to wait with the car. While Obama lauded the accomplishment, he stopped short of committing to new moon missions, or—more importantly—a manned mission to Mars. Aldrin, especially, has expressed disappointment about NASA abandoning the moon program and failing to push forward with further space exploration. In all fairness, the shuttle program has been kind of a bust. It’s unclear where NASA will head after the shuttle program ends in 2011, but one thing is sure. Now we’ll never know if ants can be trained to sort tiny screws in space.

When New Zealand is mentioned, most people either make a lame Flight of the Conchords joke or a lame Lord of the Rings joke. Now you can add earthquakes to your lame joke repertoire. The country’s south island experienced the strongest earthquake recorded this year, a magnitude 7.8 quake that actually moved the southern tip of the island a foot closer to Australia. No one was hurt in the quake, and it caused very little damage. Probably because of the protection of Gandalf.

Our hilariously evil friends North Korea are back in the news. After Secretary of State Hillary Clinton called the communist regime “infantile” and likened them to “unruly children” in their unwillingness to enter talks to stop their nuclear program, North Korea said Clinton was vulgar and stupid, and went so far as to say she looks like an old lady with a shopping cart. Well, infantile, unruly children wouldn’t say something like that, would they? Clinton responded by saying that the North Korean government has “no friends left” to protect it from international punishments for its nuclear program. We can only assume that North Korea will respond by saying, “I know you are, but what am I?” Villains from the ’60s Batman TV show conducted themselves with more maturity and poise.

Authorities in California seized $1 billion worth of marijuana this week, and arrested 82 Mexican nationals with ties to major drug cartels. The operation involved local, state and federal law enforcement agencies and has been in the works since July 13. At least 330,000 marijuana plants were seized, and there may be more on the way. The operation is expected to continue until November. In unrelated news, sales of Funyuns, Mountain Dew and Pink Floyd albums have plummeted in the area.

Sex Is Not a Trade