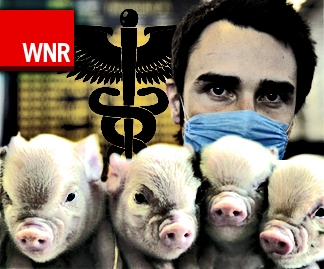 The Present-Future of Gatherings

There’s really only one story in the news this week, and it’s swine flu. As the pandemic has spread throughout North America, so has the panic. The confirmed cases of swine flu in the United States has passed 100, and nearly 300 schools have closed for fear of spreading the virus. Cases in the U.S. have been relatively mild, with a course of Tamiflu medication putting most people on the mend. There has been only one death from the virus in the U.S.—a 23 month old toddler from Mexico visiting family in Texas. And, while Mexico has reported 160 suspected deaths from swine flu, only seven have been confirmed.

Much of the media has run with the story, turning newscasts into 24-hour swine flu updates. So, while the virus itself doesn’t seem to be posing an apocalyptic risk, much of the coverage of swine flu has a doomsday sentiment. Thus far, we remain convinced that the entire panic is unwarranted. We’ll be eating our words if this turns out anything like The Stand. In the meantime, here are some of the top aspects of the swine flu story.

This has all happened before. The 1918-1919 outbreak of the flu affected one third of the world’s population, and resulted in around 50 million deaths. Most flu outbreaks don’t carry such grim results (and remember, health care wasn’t quite as advanced in 1918). In 1976, doctors feared that a small outbreak of the virus could become a pandemic. The Health Department sprang into action with a massive vaccination campaign. The result? One person died from swine flu. As many as 30 died from complications relating to the vaccine. Again, in 1988 there was a breakout of the virus in Wisconsin. Hundreds were infected, while one person died from the virus. While the virus can be very serious, history seems to show it’s not the relentless killer it’s often painted to be.

Public health officials are pledging a vaccine for the new outbreak of swine flu, but say that actual vaccinations wouldn’t begin until the fall at the earliest. Health and Human Services Secretary Craig Vanderwagen believes that 600 million doses of a vaccine could be available in a six-month timeframe. This may seem like a long time. However, anti-viral flu medications have been effective in treating the sickness in most of the people infected. The vaccine may end up being necessary, because even if the outbreak dies down, it could reemerge in the fall.

With the flu seeming to originate in Mexico, which has sharpened the debate over immigration. Many conservative pundits have blamed the spread of the virus on lax immigration. In response, the National Association of Hispanic Journalists released a statement, saying, "Immigrants, of course, have long been favorite and convenient scapegoats for some for everything from high taxes to infectious diseases." They also noted that U.S. citizens are also crossing the border to Mexico, comprising 80 percent of foreign visitors to the country.

Swine Flu Gets a Name Change

With all this hubbub, pigs are beginning to get a bad name. No doubt Wilbur, Babe and Piglet are all keeping a low profile. Also impacted by the virus’ moniker are members of the meat industry. Several countries have banned the import of pork, and Egypt want so far as to order the slaughter of all the pigs in the country. That’s right. All of them. All of this in spite of the fact that not one pig has been confirmed to have the virus. In reaction to this, the World Health Organization has announced that they will rename the flu strain "influenza A (H1N1). Yeah, we’re sure everyone will jump on board with that.