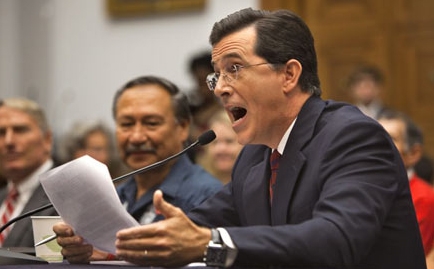 All the news you need to know, and also some you don’t.

Music coming out on Tuesday, September 28

No Age, Everything In Between

Stephen Colbert to Testify Before Congress

A few months ago, Stephen Colbert accepted a challenge issued by United Farm Workers President Arturo Rodriguez to spend a day working on a corn farm. Colbert took him up on the offer, and happened to meet Democratic Congresswoman Zoe Lofgren, who had accepted the same invitation. Now, Colbert is set to testify, along with Rodriguez, to the House Judiciary subcommittee on the issue of Protecting America’s Harvest, which will probably also discuss the AgJOBS bill, which would give a path to legal status to illegal migrant workers. The big question is, which Colbert will show up? Will the faux-right-wing pundit stay in character, or is his testimony going to be genuine? Either way, it seems odd that Congressional subcommittees are now exploring the testimony of comedians. There’s no doubt Colbert is an influential force in society, but he’s always been pretty clear that his primary role is comedy. Next up, Bobcat Goldthwait on nuclear non-proliferation deals. [Editor’s note: Colbert’s testimony is finished. He stayed mostly in character, except for near the end when he quoted Matthew 25. The rest of it was predictably hilarious and annoyed the committee.]

Katy Perry has been kicked out of the neighborhood by Sesame Street. Perry’s appearance on the show drew a raft of criticism from parents who thought the pop princess was a little too racy for children’s television. Perry’s appearance with lovable dullard Elmo, in which she sang an educational version of her song “Hot n’ Cold,” came under fire due to Perry’s low-cut dress and Elmo’s suggestively goggling ping-pong ball eyes. The children’s show is reported to have received so many complaints from parents that The Count is now clinically insane from going through all of them. Perhaps her performance would have been a bit better suited to Avenue Q. Sesame Street has cut the segment of Perry’s appearance on the show, but says the video will remain on YouTube.

A Christian researcher leading a team at the National Center for Atmospheric Research in Colorado has applied weather modeling to the portion of the Nile where Moses is believed to have led the Exodus, and has found that a strong wind could indeed part the waters just as described in the Bible. The research team discovered that winds could have created a land bridge two miles long and three miles wide for four hours before the water rushed back in. While some media sites have pointed to this as proof that natural causes explain the biblical account of the miracle, they’ve failed to mention that Exodus 14:12 actually says that God drove the sea back with a strong wind. The team will next explore scientific evidence suggesting Moses actually did speak with a husky, Charlton Heston baritone and had a comical, fake beard.

Social networking site Twitter was sent into utter chaos this week as a virus, which reached all the way to feeds like the White House, caused a number of security breaches. Innocent tweeters who just wanted to update the world on incredibly important news like what they had for lunch and their opinions on various television episodes were surprised when mouseover content directed them to porn sites, assailed them with pop-up windows and automatically retweeted posts. It was revealed that the culprit was not a terrifying syndicate of cyber criminals, but a 17-year-old Australian kid with too much time—and most likely Cheetos—on his hands. Young scamp Pearce Delphin found a security flaw in the site and made the mistake of pointing it out. It was immediately pounced on by hackers, who caused all the trolling tomfoolery. Delphin has apologized, saying he didn’t realize what his discovery would be used for. Regardless of the apology, the kid may still face criminal charges. Pwned!

In a story that’s not humorous at all, another evangelical leader has become embroiled in a homosexuality scandal. Bishop Eddie Long of New Birth Missionary Baptist Church in Atlanta has been a very vocal critic of homosexuality. Now allegations have emerged that Long coerced three teenage boys into sexual relationships. Long’s accusers allege that he requested the teens to be nude in his presence, and would request sexual favors when they traveled. Long has denied the allegations and says he looks forward to defending himself. Regardless of the truth or falsehood of the accusations, it reveals a troubling trend in the light of the scandals surrounding Ted Haggard and George Alan Rekers. Evangelical leaders are increasingly being haunted by these allegations, and whether they be revelations of true moral failings in some cases or smear campaigns in others, evangelicalism is receiving some pretty bad press.

A Stomach Punch from God