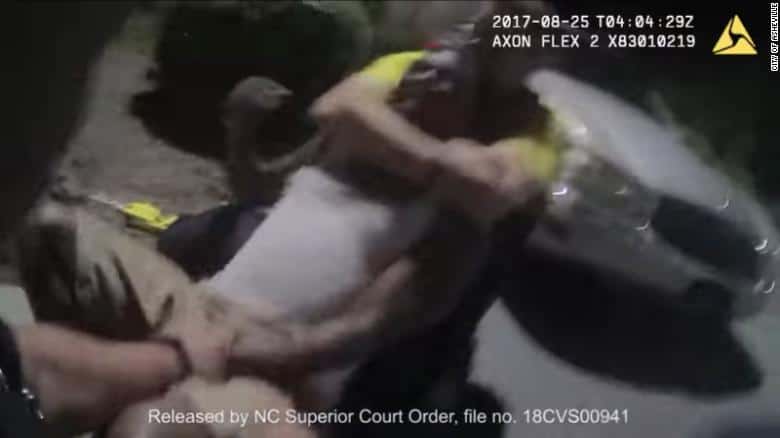 The city of Asheville, North Carolina, has released videos from nine different body cameras showing the beating and abuse of a man suspected by police to have been jaywalking. The footage pertains to the 2017 arrest of Johnnie Jermaine Rush.

One video shows officer Christopher Hickman wrap his arms around Rush’s neck from behind as the police attempt to subdue him. He was removed from patrol duty a day after the incident, and he resigned from the department in January of this year (he was to be terminated the same day).

Hickman was taken into custody on March 8 and charged with assault and strangulation, assault inflicting serious injury and communicating threats, according to the city of Asheville. (You can see the video here; it might be disturbing for some viewers.)

Another video was released Monday showing a conversation between Rush and Hickman outside a hospital after the incident.

“No disrespect with you sir, I understand that I ran and whatnot, but you didn’t have to keep punching me and choking me,” Rush said.
“Yeah, I did,” Officer Hickman said. “Because you never complied with my order.”
Rush said he wasn’t able to comply because he was being choked.
“I didn’t start choking you until after I probably punched you 10 times,” Hickman responded.
Another video shows Hickman telling a superior officer that he had used his taser to club Rush in the face “three times. That was effective,” Hickman said. “I punched him in the face with it about as hard as I could.”

The city of Asheville, via interim City Manager Cathy Ball and Police Chief Tammy hooper, issued an open letter in conjunction with the video: “This incident has created a loss of trust within the community, particularly among people of color. The City of Asheville understands that there is substantial work to do to restore the public’s trust.”

Jon Acuff on the Dangers of Conflating ‘Job’ and ‘Calling’