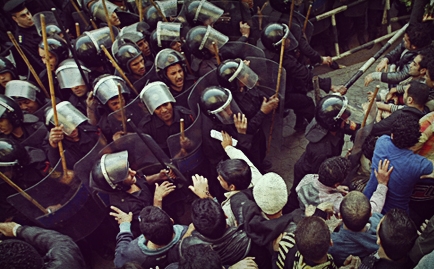 It must have been in a moment of weakness that I agreed to make some comments on the on-rushing, revolutionary events taking place in the Middle East and North Africa. Anyone who claims to know how all this will end is a fool. And tomorrow’s events may undermine my comments of today. Basing those comments on a Christian worldview only makes the challenge greater. But throwing caution to the wind, there are four observations I would put forward.

My first observation is that “realism” in our country’s foreign policy often proves in the long run to be anything but realistic. Among foreign policy practitioners and scholars, there is a long-running debate between realists and idealists. Realists put American interests first and foremost. The goal of our foreign policy should be to promote our national self-interest. Idealists argue that humane values, justice and the promotion of human rights (including religious freedom for all) are what should guide our foreign policy, or, at the least, they should temper or balance the realism in our foreign policy. A Christian worldview suggests that ideals should play a significant role in American foreign policy, a position that at times exposes one to charges of being naïve or soft-headed.

For years realism dictated that we should support dictators such as Mubarak in Egypt, Gadhafi in Libya and Abdullah Saleh in Yemen. After all, they kept oil flowing to the West, provided political stability, limited their criticism of Israel and opposed al-Qaeda and other violent Islamic extremists. So what if they engaged in massive corruption, oppressed women, limited religious freedom and imprisoned and tortured their own people? American self-interest was being served. But now we see resentment and anger toward these dictators boiling over in revolution, with uncertain results for their own people and for American interests. Human rights abuses may go from bad to worse as new dictators replace old ones or Islamic extremists use the turmoil to seize power. Anti-American anger may rise in those countries as the people now blame the United States for supporting dictators that oppressed them for years.

If our “realistic” foreign policies we pursued for years had been more idealistic—urging greater political freedoms onto corrupt dictatorships, speaking more boldly for religious freedom and other human rights, and encouraging economic policies more attuned to the needs of the masses—change might have come about gradually, and pro-democratic forces might have been strengthened and might now be looking to the United States for ideals and practical steps to take. A Christian-influenced idealism may, in the long run, be more realistic than a pure realism.

My second observation is that no one can know with any confidence whether the rapidly unfolding events will lead to more or less freedom for Christian minorities. Coptic Christians make up 10 percent of the Egyptian population—many of them welcomed and some took part in the demonstrations that overthrew Mubarak. Many saw Mubarak often looking the other way as Christians were harassed, discriminated against and even killed (a horrific, terrorist bombing of a Coptic Church this past New Year’s Eve killed 21 persons). In Libya Gadhafi largely tolerated small, largely migrant-worker, Christian groups, and thus some fear that Libyan events may lead to more persecution or restrictions on Christians. But in Egypt, Libya and elsewhere, no one can know whether new regimes—or old ones after protests have faded away or been violently put down—will lead to more or less freedom for Christians. There is hope; there is also the threat that radical, violence-prone Islamist leaders and movements will seize the chance to gain greater influence.

A third observation is that there is uncertainty over what courses of action the United States should now take. Should we take a hands-off approach? Or should the U.S. cheer the uprisings on from the sidelines, while taking no concrete actions even when unarmed protesters are being slaughtered? Should we now desert dictators that, rightly or wrongly, we aided and supported for years and who in turn were our allies, provided some political stability and opposed terrorists? Would a no-fly zone in Libya, enforced by American aircraft, lead to the fall of Gadhafi, or would American intervention play into his hands by making the current revolt appear American-instigated? Each day’s headlines raise new questions of what America’s actions should be.

Actions the United States could pursue might lead to a safer, freer Middle East and North Africa, with more respect for human rights and greater economic equality—or they might lead to a more radicalized Middle East and North Africa, with less respect for human rights, no greater economic equality and new training grounds for terrorists bent on the destruction of the West. No one can know with any real certainty what the consequences will be of any given course of action.

In such a situation of extreme uncertainty, I believe the United States should be guided by two standards: a commitment to human rights and political freedom, and an avoidance of military action except as a last resort. To a degree I am back to my first observation—that ideals can and should help guide our nation’s foreign policy. A Christian worldview surely requires that a defense of religious freedom for all and other human rights and of political freedom must loom large in what we do. And both Christian values and history teach that military action often leads to negative consequences hard to foresee, and thus should be a last—not a first, second or third—resort. While following these two standards, our policies might yet fail and the outcomes might prove to be much less than one would hope for, but at least we would have lived up to our people’s best ideals. That in itself is a positive achievement.

A fourth observation is that we as a country need to (re)learn a lesson in humility. There simply are some world events that, even with all of our economic and military might, we are powerless to control. God is in control; not the Pentagon, not Congress, not the White House. We know this in theory, but the turmoil in the Middle East and North Africa—which we did little to bring about and are now at a loss to direct or control—is a good reminder of this fact. After the fall of Communism left the United States as “the sole superpower,” many were tempted by a hubris that assumed we Americans were in control of events. But first the economic crisis and now the unfolding events in North Africa and the Middle East reveal that we are not in charge. God is. That may be the most important lesson of all, and one that we still need to learn.

Stephen Monsma is a research fellow at the Henry Institute for
the Study of Christianity and Politics, Calvin College (Grand Rapids,
MI) and a professor emeritus of political science at Pepperdine
University (Malibu, CA). He has published some 14 books on a wide range
of topics in the area of politics, public policy and Christianity.