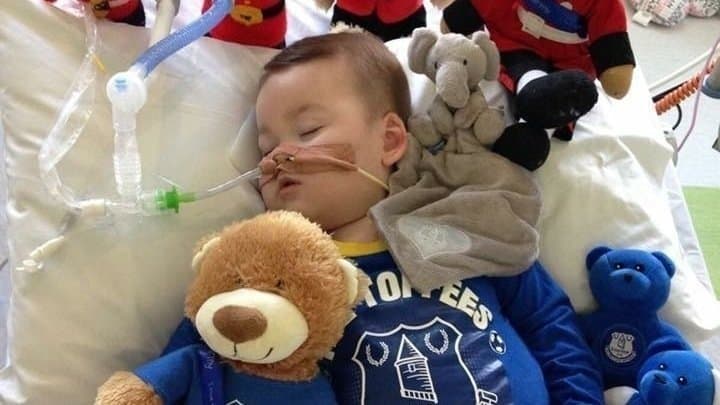 The parent’s of terminally ill 23-month-old Alfie Evans are petitioning to take the toddler home after their bid to fly the child to Italy for continued medical treatment was denied by the UK’s High Court. The Evans family had hoped the UK Court of Appeal would overturn the High Court’s decision, based on new evidence suggesting the child may have a greater chance of survival than had been previously determined.

Their fight to preserve the child’s life has garnered international attention and support. It also raises complex ethical questions about life and death.

Here are some key points of the story.

What Does Alfie Need Treatment For?

Alife was admitted to Alder Hey Hospital in late 2016 hospital for treatment for “a neurodegenerative disease associated with severe epilepsy and has been in a semivegetative state for more than a year,” reports CNN. The ambiguity of Alfie’s condition is explained in a statement from his doctors. Alfie survived with the assistance of artificial ventilation. Doctors speculated that without treatment, the child would surely die.

Why Are the Courts Involved?

Naturally, Alfie’s parents were opposed to the idea of an end of life plan for the toddler. The conflict between the parents and the hospital led to a referral to the UK High Court’s Family Division.

The hospital explained in a statement that it is common for cases to be referred to the courts when there are disagreements about what course of action is within the patient’s “best interest.” When the High Court did not rule in favor of the family, the Evanses made an appeal which was also lost and then taken to the Supreme Court.

What Does Any of This Have to Do With Italy?

After Alfie’s father’s recent trip to meet Pope Francis (who made a statement in support of saving the child), there was discussion about bringing the toddler to Bambino Gesu Pediatric Hospital in Rome. But the doctors in Italy later said that transporting Alfie to another hospital would probably make little difference. Alfie’s condition, to many of the medical professionals involved in either country, seems like it may be irreversible even with further treatment.

“The Italian government granted Italian citizenship to Alfie on Tuesday and applied to the foreign secretary for permission to intervene to save Alfie’s life,” according to CNN. But UK officials have banned Alfie from making the trip.

Alder Hey explained the reasons for prohibiting Alfie from going to Rome in a statement:

Three clinicians from Rome visited Alfie in September 2017, discussed his case with the team here and reviewed his notes. Following their detailed assessment, they agreed with the conclusions of the Alder Hey team that Alfie’s condition was effectively untreatable. Significantly, they noted that given Alfie’s epilepsy, there was a risk of him suffering further brain injury if he was transferred abroad. They have offered to take him to their hospital but agree there is nothing they can do to help or improve his condition. Further invasive procedures have been suggested but these will not help him recover. Our clinicians are professionally obliged to always consider what is in a patient’s best interest. We do not believe that it is in Alfie’s best interests to go to Rome and be subjected to invasive and procedures when there is no hope of recovery or a cure.

So What’s Going On Now?

The Supreme Court ruled against the family’s appeal to procure further treatment. On Monday night, Alfie’s life support was withdrawn. But Alfie unexpectedly continued breathing independently. The child was given oxygen and hydration support on Tuesday morning.

As the parents bid to take the child home, opinions differ on what is the best recourse. There are some who, like Alfie’s parents, have hope that toddler can recover. Some medical professionals, however, remain less optimistic Oxford ethics professor Dominic Wilkinson commented on the case saying:

In Alfie’s case, none of the foreign experts have offered any new treatment or any new outlook for Alfie. The Italian specialists have apparently indicated that they believe that his care should be palliative … Sometimes, the sad fact is that parents do not know what is best for their child … They are led by their grief and their sadness, their understandable desire to hold on to their child, to request treatment that will not and cannot help.

[/lborder]
However, Pope Francis has recently spoken out on the child’s behalf, as well as pro-life organizations, who believe that he should receive any treatment that could possibly help.

Moved by the prayers and immense solidarity shown little Alfie Evans, I renew my appeal that the suffering of his parents may be heard and that their desire to seek new forms of treatment may be granted.

Alfie Evans has been breathing on his own for nearly twelve hours. Is now receiving oxygen and hydration. #AlfieEvans pic.twitter.com/QcbLDR457d

Everything You Need to Know About Shariah Law