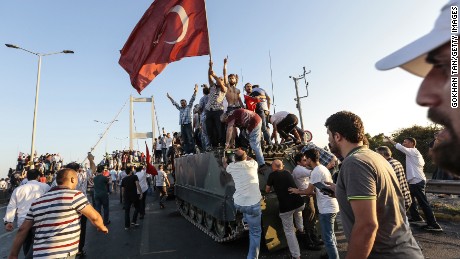 Turkey is still reeling after a failed attempt at a coup left more than 250 people dead and 8,000 police officers and several thousand government officials detained.

The attempt started on Friday with an army group declaring that they had “taken control of the country,” but thousands of Turkish citizens responded to a rallying call from Turkish President Recep Tayyip Erdogan, who encouraged them to take to the streets to fight against the army group.

Turkey’s government initially blamed the coup on Fethullah Gulen, the former chief ally to Turkish President Recep Tayyip Erdogan, who is currently living in exile in Pennsylvania. New information has come out saying that Turkey’s former air force chief Akin Ozturk has confessed to planning the coup, according to Al Jazeera.

The aftermath of the coup will be important to watch because of the other implications it will hold. Shortly after the failed coup, Erdogan discussed reinstating the death penalty, which is not allowed for countries with EU membership. Turkey is still waiting to join the EU.