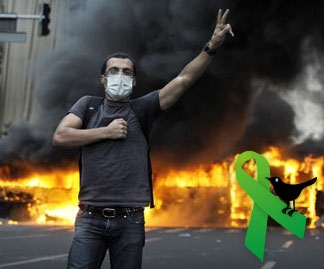 In response to the growing unrest in Iran and rising protests against Mahmoud Ahmadinejad’s regime and a possibly stolen election, the Iranian government tried a time-honored move that seems to be the default position of any authoritarian regime. It banned the media. Ahmadinejad’s government kicked out foreign journalists, jailed national journalists who were critical of the election results and shut down communications networks. With only Iranian state-run television and newspapers available to report (and put government spin) on the tensions, it seemed Ahmadinejad had assured himself of keeping the international community in the dark.

But there’s a fly in the ointment of this plan. Four flies, actually. In the midst of a campaign of censorship and brutal opposition to all dissent, Twitter, Facebook, Flickr and YouTube have become a window for the rest of the world to keep tabs on the situation. Iranians are turning to the sites to organize protests, voice their displeasure and give the international community a firsthand glimpse of their plight.

Sites like these have long been the domain of frivolity. Post some scanned Polaroid photos, watch that viral video where the kid is hopped up on nitrous oxide and update your friends on the ins and outs of your daily existence. But with social networking sites essentially comprising the only free press in Iran, the situation has changed. The U.S. State Department has stated that Facebook and Twitter have become critical sources of information, and news networks like CNN are pulling updates from the sites, their own embedded journalists having been banished.

Solidarity with the Iranian people has grown as grassroots reporting has kept a tech-savvy generation intimately abreast with the rising tide of civil unrest. On Twitter, people displayed their unity and empathy by placing a green overlay on their avatar (green being the official color of the opposition movement). Videos of the June 20 killing of 27-year-old philosophy student Neda Agha Soltan by Basij militiamen were posted on YouTube and Facebook, and the young woman immediately became a symbol for generational protest.

All of this signals a dramatic shift. The rumblings of a social media revolution have been underway for a long time, but the role of social media in Iran has seen the phenomenon come of age. Sites like Twitter and Facebook aren’t just fun ways to dally about and procrastinate. They’ve shown themselves to be grassroots media powerhouses, and the way people receive news will never be the same.

This shift adds up to a democratization of news gathering. The days of 24-hour news networks and stalwart newspapers encapsulating and disseminating world events to the plebeian masses are behind us. From this point, anyone with Internet access is a journalist, and has the potential to break the most important story of our generation. When even networks like CNN are gathering their information from Twitter, it shows that Twitter has now become a more powerful medium than the professional embedded reporter. Eyewitnesses no longer have to give their accounts to the press. They are the press.

The last gasp of the professional news agency can be seen pretty clearly in the desperate groping of the 24-hour news networks. Many like to argue that one network has a clear liberal bias while another has a clear conservative bias. That may be, but it takes a back seat to the reality of the bias shared by every 24-hour news network: entertainment. Cable news networks are no longer purveyors of facts. They’re three-ring circuses populated by bloviating personalities who attract an audience by having the capacity to become righteously indignant over any issue whatsoever. And, liberal or conservative, they’re out to entertain rather than inform. If we’re honest—no matter which one, if either, you agree with—Bill O’Reilly and Keith Olbermann are two halves of the same hideous coin, and their ilk demonstrates the deterioration of journalism into shouting matches and name-calling. A race for viewers rather than facts.

While the cable news networks sinking into a mire of punditry and hype, ordinary people are quietly wresting control of the media from its conglomerations and returning it to the masses. But the caveat in all this is the trustworthiness of a grassroots press. How do we know the information we’re receiving is factual? The benefit of the sheer volume of information enabled by sites like Facebook and Twitter is that fact-checking amounts to building a consensus of eye-witness accounts. Moreover, the pictures and videos being uploaded within moments of the events depicted paint a stunningly clear picture. They say more and give a greater sense of reality than professionally shot footage with a bass-y voiceover.

Thomas Jefferson once said, “The only security of all is in a free press.” He might have added, the only security of a free press is in it resting in the hands of the people. As the situation in Iran continues to unfold, one thing is certain. A press that rests in the hands of the Iranian people is doing more to build international support—and possibly the catalyst for the nation’s freedom—than any traditional news outlet.