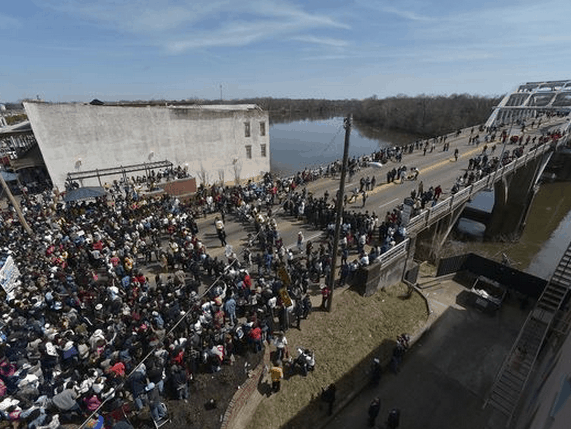 This weekend, thousands of people gathered in Selma, Alabama, on the 50th anniversary of a protest that help change the Civil Rights movement in the United States. The turnout for the march was so large that authorities even expressed safety concerns about the numbers of people walking across the iconic Edmund Pettus Bridge, though the march continued throughout the day. The annual march is in remembrance of an afternoon that has become known as Bloody Sunday: In 1965, police savagely cracked down on Civil Rights demonstrators. The activism is largely credited with helping to pass the Voting Rights Act of 1965. On Saturday, President Obama visited Selma, delivering a speech honoring the heroism of the individuals who peacefully marched together in 1965:

We gather here to honor the courage of ordinary Americans willing to endure billy clubs and the chastening rod; tear gas and the trampling hoof; men and women who despite the gush of blood and splintered bone would stay true to their North Star and keep marching toward justice … They did as Scripture instructed: “Rejoice in hope, be patient in tribulation, be constant in prayer.” And in the days to come, they went back again and again. When the trumpet call sounded for more to join, the people came – black and white, young and old, Christian and Jew, waving the American flag and singing the same anthems full of faith and hope

4 Divides the Church Needs to Cross

Groot Will Be the Star of a New Marvel Comic Series