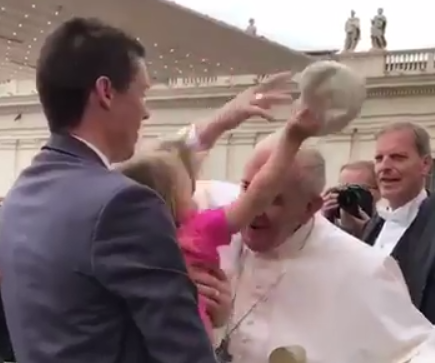 Fear and Shame Shouldn’t Keep You From God

The pope has many duties, and one of the most consistent is always to wear interesting hats (seriously, have you seen that hat Jude Law wears in Young Pope?). So it only makes sense that this girl, who went with her godfather to see Pope Francis in Rome, decided she wanted the pontiff’s headgear—which, in this case, was a zucchetto.

The best part, though, is that Pope Francis is just as amused by the moment as anyone. Honestly, his reaction makes the whole thing. Check it out:

Took my Goddaughter to meet the pope. She stole his hat! pic.twitter.com/SdSorop3uN