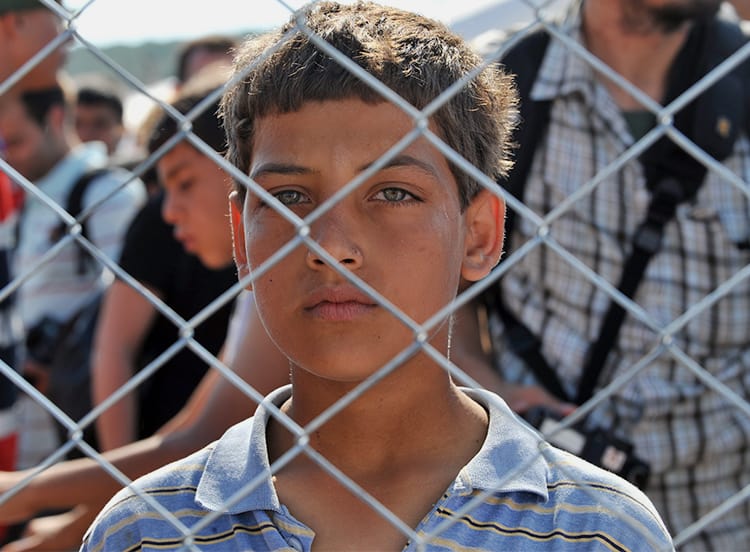 Del fled a civil war in Sudan as a young boy, trekking across two countries to seek safety, and saw many friends and relatives die in the desert along the way. Del was resettled in the United States as one of the “Lost Boys of Sudan” a group of young, Sudanese refugee boys who made international headlines for the arduous journey they endured fleeing a civil war.

He has since become a pastor in Pennsylvania, but individuals like Del will no longer be able to come to the United States as the courts ruled that President Trump’s executive order can indeed exclude refugees without a “bona fide” relationship to a family member in the United States. Because orphaned refugee children do not have an adult blood relative in the United States, they cannot be resettled even though a foster care family may have signed the appropriate paperwork and received the proper training to foster a refugee child.

Children make up half of the refugee population in the world, which is at record high levels since World War II. Unaccompanied refugee children in particular are more vulnerable to trafficking, physical violence and abuse, forced military recruitment, and discrimination in health and education access because they do not have parents and family to take care of them. For these refugee orphans, being placed with a family in the United States was the one opportunity they had to find safety, stability and freedom in a loving environment as the United States is the only country in the world that accepts unaccompanied refugee minors where both parents were killed in war or are untraceable as conflict has ensued.

The Issacs are a Maryland couple who have been waiting to foster a 16 year old Eritrean girl who was forced into child labor and is now stuck in a refugee camp in Ethiopia. Their two younger children ask when they can meet their older sister, while a bedroom they prepared for her arrival remains empty. After a long process that includes a UN agency referral, a thorough security screening, and a match with a US-based foster care agency and family, this young Eritrean girl is one of more than 100 refugee minors who remain stranded overseas. The Isaacs have to consider another harsh reality- if their Eritrean girl turns 18 while her paper work is being processed, she will no longer be eligible for the program.

These vulnerable orphan refugee children are the most vulnerable of the vulnerable. They have no caregivers to provide for them nor a home in which they can find safety and stability. Refugee orphans fit into the two categories of vulnerability the Bible explicitly references again and again. Unfortunately, these refugee orphans are not the only ones excluded. Thousands of Iraqis who are persecuted because of their affiliation with the US (often by aiding our US troops through translation and other services) will not be allowed in the program. Extremely vulnerable Syrian refugees, with children needing urgent medical care, will also not be admitted through the program. These refugee orphans, US-affiliates Iraqis, and Syrian children make up the approximately 30% of cases who do not have a family tie to the United States which was never a requirement to be resettled before this year.

The dissipation of US leadership in refugee protection has larger ramifications as well. A report by Human Rights First found that the world’s capacity to offer resettlement will likely fall by at least 30-40% because the U.S. leadership in refugee resettlement has diminished so significantly this year. While the President has been vocal about supporting persecuted Syrian Christians, there will be less persecuted Christians resettled to the United States this year than last year because of the reduced refugee ceiling from 110,000 to 50,000 this fiscal year,

Since 1980, the United States refugee program has accepted over 3 million refugees who were fleeing persecution and conflict to start their lives anew in the United States. From Vietnamese boat people, to Bosnian refugees fleeing genocide, to Iraqi Christians, the refugee program has garnered strong bipartisan support not only as a humanitarian program but one that promotes our national security interests. In fact, there have been more refugees resettled under Republican administrations than Democratic ones, with President Reagan accepting over 200,000 refugees in a single year in 1980.

Our government must do all it can to keep our country safe, but the executive order attempts to solve a problem that never existed in the first place. Not a single refugee who has come in through the US refugee admissions program has taken the life of an American in a terrorist act. The Cato Institute estimates that the chances of being killed by a refugee on US soil in a terrorist attack is 1 in 3.64 billion. There’s a higher chance you will be killed by a lightning strike than be killed by a refugee. Many prominent national security experts have attested to the extensive vetting of refugees and how resettling refugees is actually an anti-terrorism tool.

Those who say that refugees should stay “where they are” and not come to the United States ignores the reality that refugees face incredible insecurity and danger even in countries of asylum, not only to mention the fact that regional countries that are often underdeveloped and resource-thin have refugees make up to 25% of their population. The US accepts less than half of 1% of the world’s refugees who then make up .003% of our population. This also ignores the incredible contributions that refugees make to the United States. The New American Economy found that refugees are more entrepreneurial than other categories of immigrants. Google was founded by a former refugee, and a refugee served as our Secretary of State.

Conflict and war do not define the identity of refugees, but their resilience in the face of incredible hardship embodies the very characteristics we need to make our country great. Earlier this year, World Relief published an open letter in the Washington Post in which over 6,000 evangelical leaders from every state in the country signed on in support of welcoming refugees to the US. This letter demonstrates that despite polls which demonstrate that white evangelicals in particular support the executive order, many churches in fact are working to welcome refugees. These pastors, volunteers, advocates and refugees themselves are changing the narrative about who refugees are and who we are as followers of Christ.

And here’s what you can do:

>There is so much misinformation about refugees and immigrants in general that need to be debunked. Trust in reliable sources (like the government, trusted NGOs, nonpartisan think tanks, books, etc.) to get factual information and use this information to get the truth about refugees out there.

Every state in the US resettles refugees (except Wyoming and Montana). Find a local resettlement site and volunteer to help a refugee in their transition. You will likely receive more in that relationship than you give.

Refugee resettlement is not going to solve the refugee crisis, as most refugees live in refugee camps and urban settings often for decades. It’s important that front line organizations continue to get the resources they need to assist refugees worldwide.

Contact your legislator and urge them to support a more generous refugee admissions ceiling than 50,000 which is the current level in the executive order. World Relief has been asking for 75,000 refugees for FY2018 which is the level Congress approved funding for. Ask your Congress person to do everything they can to support refugees abroad and in the United States.

Our response to refugees is not just a test of our politics; our response to refugees is ultimately a test of our faith. Our enemy is not someone of a different religion, race or ethnicity. Our ultimate enemy is fear because fear will cripple us from participating in the mission of God. But when the church welcomes and loves the very people the world wants us to hate, we advance the mission of God. If Jesus left all his power and privilege to enter into our brokenness, then we have a responsibility, and a privilege, to enter into the brokenness of others, especially those who have lost their homes and loved ones to violence and war.

Jenny Yang is vice president of advocacy and policy at World Relief and the author of Welcoming the Stranger.