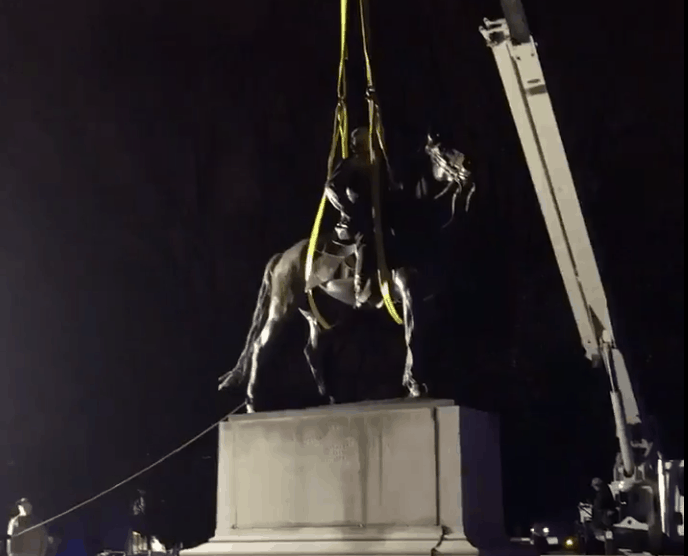 Over night in Memphis, two large statues of Confederate soldiers—one a general, the other an actual Ku Klux Klan member—were covertly moved from their massive pedestals.

Klan leader Nathan Bedford Forrest is actually buried under the monument, though his gravesite will remain at the location.

Crowds gathered and shouted “bring it down,” but, if wasn’t for some creative legal maneuvering, the statues might still be up this morning.

Back in 2015, after the city leaders voted to remove one of the statues, the Tennessee Heritage Commission blocked the request, meaning legally, the city couldn’t remove them.

The group “Sons of Confederate Veterans” has also fought their removal.

However, the city found a creative workaround to get them removed. Memphis passed a law allowing the city to sell public parks to nonprofits for less than their market value. They then sold both parks to a new local group called “Memphis Greenspace” for $1,000. Since they owned the parks, Greenspace was able to remove the monuments without going through the commission.

Memphis’ mayor told reporters, “History is being made in Memphis tonight. The statues no longer represent who we are as a modern, diverse city with momentum.”

Happening in #Memphis @ the #NathanBedfordForrest statue. This is a huge step towards healing the deep racial wounds that have tried to define Memphis’ future. As a city, our greatest victories happen when we are willing to work together for a brighter Memphis. #TogetherWeCan pic.twitter.com/GJFS6ljoNN

The Holiday Handbook for Surviving Your Family

Pastor A.R. Bernard and Samatha Bee Look at What Role God Has in Appointing Leaders