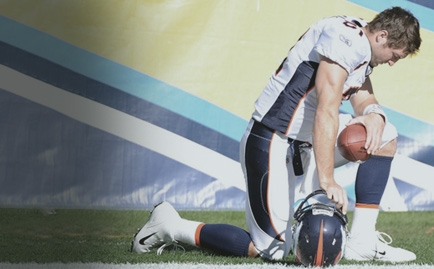 It didn’t take long for the tweets and Facebook statuses to come flying in yesterday afternoon. Tim Tebow had just led the Denver Broncos to yet another come-from-behind, overtime victory against the Bears. Twitter user @Jesus_M_Christ (usually reserved for remarkably offensive/juvenile humor supposedly from Jesus) said “I think my Dad loves @TimTebow more than me.” Facebook newsfeeds were filled with people comparing Tebow to Christ, wondering if God loves Tebow more than anyone else and what Marion Barber did this weekend to make God mad. It seemed like the whole world was talking about Tim Tebow as the Football Messiah.

But, of course, not everyone was.

For almost as long as I’ve known who he was, I’ve been anti-Tim Tebow. In fact, I was so anti-Tebow, and so outspoken in my opposition, that it became a calling card among my football-watching friends. I was the “token Tebow basher.” Anytime he entered a conversation or appeared on television, someone would inevitably mention how much I disliked Tebow and I would promptly launch into a spirited, anti-Tebow diatribe.

I am self-aware enough to recognize that good old-fashioned envy probably played a role in this. Tim is athletic, admired, wealthy and famous. He has published an autobiography. He has one of the 32 most glamorous jobs in American sports. And every week, he continues to build his own mythology—if it’s not yesterday’s miraculous, overtime comeback against the Bears, it’s a near-perfect second half against the Vikings or a two-point conversion against the Dolphins. By all tangible measures, he is better at life than I am.

So yes, envy was part of it, but it wasn’t all of it. Because, at the end of the day, it wasn’t so much a dislike of Tim Tebow—what’s there to dislike about the guy? The man has no identifiable flaws—it’s that I was afraid of Tim Tebow. For all those Christians who eagerly embrace Tebow for his outspoken beliefs and the opportunity for a celebrity representative, there are those of us who hang back, skeptical of where all this is headed. And perhaps, for us, our hesitancy can be summed up in two words: Ted Haggard.

But it doesn’t have to be him. It could just as easily be Rev. Jimmy Swaggart, Rev. Jim Bakker, any number of Roman Catholic priests or any of the countless “family values” politicians who have recently resigned in scandal. Or how about Mel Gibson? Wasn’t Scott Stapp from Creed a Christian at one time? We could use him as well.

You get the point. Tim Tebow isn’t the first Christian luminary to garner attention from the national media. Others have tried it, and, more often than not, the results have not been pretty. Does this mean Tim Tebow’s career is headed for the same calamitous conclusion? No. Does it mean that I, along with many Christians—especially twentysomething Christians—am a bit gun shy when it comes to embracing a new Christo-cultural superstar? Absolutely.

Whenever a prominent Christian begins using his faith as a marketing tool, two things typically happen. He becomes the de facto mouthpiece of American Christendom. And Christians end up having to defend the Gospel in light of whatever hypocrisy said public figure was recently caught in. It’s not quite a universal principle, but it’s happened frequently enough that many of us have been forced to question if these high-profile proselytizers have perhaps done more harm than good.

Yes, there is a tremendous need for Godly leaders in politics, pop culture and sports. Yes, there are incredible opportunities for well-known Christians to use their celebrity for the good of the Gospel. But as the stage gets brighter and the stakes get higher, the consequences become exponentially more severe—and not just for them. We’re in this together. Christians are viewed and portrayed by the secular media as a singular mob. When one of us falls from grace, we all fall. It wasn’t only Pastor Haggard who had his reputation sullied and his ministry undermined; it was all of us.

This, I think, is why so many of us were hoping Tim Tebow would just go away. We didn’t wish ill of him. We weren’t hoping for an injury or a moral collapse. We just wanted him to drift away into obscurity on the Broncos bench. Then, and only then, could we be certain that we would never have to defend Christ for something Tim Tebow did.

It is, of course, much too late for that now. Tim Tebow has become the Broncos’ starter and has gone from being mentioned three days a week on SportsCenter to being the lead story seven days a week. Obscurity is no longer an option. Mr. Tebow is, by a significant margin, the most talked about person in America’s most talked about sport. He has a larger pulpit than any 10 megachurch pastors combined. I don’t think it’s too much to say that, as of right now, Tim Tebow is the most important Evangelical Christian in America.

And Tebow has risen to the challenge. He’s saying and doing all the right things. Two weeks ago, in an interview on ESPN’s First Take, Tebow found a way to mention that Jesus Christ loved me and died on the cross for my sins. You don’t have to be a football fan to know that this is not the type of thing one typically hears on “The Worldwide Leader In Sports.” And yet, thanks to Tebow, it’s becoming more and more commonplace.

Last week, I listened as two sports talk radio hosts spent 20 minutes talking about the role of religion in our daily lives. I read articles on FoxSports.com, ESPN.com, Grantland.com and SportsIllustrated.com that discussed things like faith, sovereignty, God’s calling on our lives and the importance of giving thanks. You know—typical sports stuff.

This is, of course, the reality facing every Christian. With every selfless gift or act of compassion, with every careless word or little hypocrisy, each one of us is reflecting our Savior to those around us. The difference is, for most of us, “those around us” doesn’t include 300 million sports fans. The difference is, for most of us, there aren’t millions of strangers rooting for us to fail.

It is this reality—Tebow’s reality—that motivated a friend of mine to recently post this comment on Facebook: “Serious question for everyone who knows who he is and the position he’s in nationally: have you prayed for Tim Tebow today?” It was that question (yes, a Facebook status) that changed the way I think and talk about Mr. Tebow. And it might provide a guideline for all of us who’ve been skeptical of Tebow—or any other Christian leader we’ve been burned by in the past.

I don’t know Tebow’s heart. I don’t know what, if any, personal demons he’s wrestling with. I don’t know if there’s an embarrassing scandal in his future. What I do know is that it is a disservice to him and the opportunity he represents for me to sit back, cross my fingers and hold my breath until the bad news breaks.

Why not pray for him instead? Why not cheer him for all he has done and all he might do for the Kingdom? Why not use “Tebowmania” to work Christ into conversations or relationships where he might not typically appear?

Why not embrace “Tebow Time,” however long it lasts?

The Pain and Peace of Death