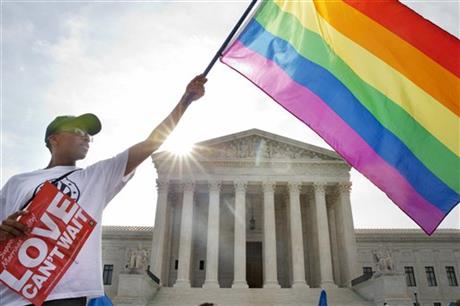 This morning, the Supreme Court of the United States declared that same-sex couple have the right to marry in any state in the United States, according to the Associated Press. Already, gay couples can marry in 36 states and the District of Columbia. The court’s ruling means remaining states will stop enforcing bans on same-sex marriages. The ruling was close—with five of the justices ruling in favor and four against. Justice Anthony Kennedy wrote the majority opinion, arguing that same-sex marriage does not “denigrate marriage,” but instead, that gay and lesbian couples seek “to live their lives, or honor their spouses’ memory, joined by its bond.” All four dissenting justices wrote separate dissenting opinions, with Justice Antonin Scalia saying he was worried about “this court’s threat to American democracy.” The losing side has three weeks to ask for the court to reconsider the case before the ruling goes into effect.

In his statement on the decision this morning, President Obama said the ruling is a “victory for America.” “This ruling will strengthen all of our communities by offering to all same-sex couples the dignity of marriage across this great land,” he said. However, he also encouraged those in support of the decision to be mindful that the different viewpoints on the issue come from places of sincere belief, in order to “revere our deep committment to religious freedom” …

The Danger of Being a Cynic

28 People Were Massacred on a Resort Beach in Tunisia