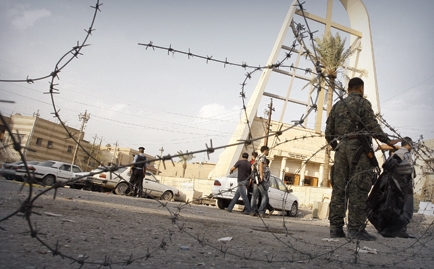 I have been under attack many times, but it is not always clear if it is because of who I am and what I am doing or because of my faith. As far as I am concerned, the two cannot be separated; I do what I do because I am sure that my Lord has called me to do it. Some of this work is seen as a direct threat to those who are trying to cause violence. Therefore, they will attack anybody who is seen as a hindrance to their methodology. Some of the attacks on me may have been simply because I am a Westerner and there is an opportunity to attack me.

Others times, I have clearly been targeted. I will not forget the day when I was thrown into a room with chopped-off human toes and fingers. I thought my digits would be next. My response in such an incident was not well thought-out; I simply wanted my Lord to aid my release and preserve me, and He did. On another occasion, there were pictures of me plastered on walls around Baghdad; the words with the pictures were simple—I was wanted dead or alive. When that happened, my embassy made me leave the country. Fortunately, it was not long before I was able to return. My security now is very intense and far greater than in the post-war years.

It always used to amaze me when I went to church each week with body armor on, in armored cars and surrounded by Iraqi military. I don’t think there were many other ministers in the world who would go to church like this. Now, things are very different—I live in the church compound. Not only are we surrounded by bomb barricades, but the number of police and army security is phenomenal and they are all provided by the Iraqi government.

While I am aware that I am constantly at risk and have to listen to my security, at the same time I am acutely aware that the members of my congregation have no security. They are all at risk because they are all Christians. And they could have escaped for their lives.

It is difficult to just provide lists of how our people have suffered. They have been killed, kidnapped and tortured. To even write about these cases is so painful.

As I stand at the front of church each week, I think of those who have been killed or kidnapped. I remember those who are no longer with us when I see their families. I have often tried to think of ways to protect them, but I cannot. When they are with me, I have certain ways of protecting them with my security. Bombs can always hit us from below and rockets from above, though, so there is no way of providing total protection.

I am regularly asked about the suffering church, the persecuted believers and the Iraqi church. I have tried to ascertain why our people are under attack and have come up with what I call the three p’s of persecution: perception, proclamation and practice.

The other day in Baghdad, I sat down with some Muslim and Christian friends. The subject of knowing the other came up. They were all sure they knew who was a Muslim and who was a Christian. They went into great detail of how the other looked. To be quite honest, I cannot tell the difference between Iraqi Christians and Muslims, but they are sure they can. What is clear is that the perceptions are very real. They are sure they can perceive who the other is. The perception of the other is real and held to also by those radicals who are involved in the persecution of the other.

All Christians I have met in many different countries feel their Christianity is something they should not keep quiet about. This is also true in Iraq. The Christians are careful and not abrasive about their faith—but they do constantly proclaim it. Their faith is something for them to be proud of. Most will visibly wear a cross around their neck.

It is very interesting talking to those who have been kidnapped. They all say they were told to say the Islamic words of conversion. Most of the Christians I know have not. Their faith is the most important thing in their life. A few I know have admitting to saying the words say they did so because they feared being killed. They were returned but came to me fearfully and confessed what they had done. I have always told them they are forgiven and God will not hold it against them. They are always more serious in their faith on return. There are many others who have never been returned after having been kidnapped; they are always the people who I knew would never say the words of conversion.

Finally, there is the issue of practice. Christians in Iraq always practice their faith. There is no concept of being a nominal Christian. If you are a Christian, you go to church on Sunday. Friday is not the main day of worship even if Friday is the main day off for the weekend in a Muslim culture. Christians do things differently than the Muslim majority. It is very difficult to hide what you do—everybody knows who the Christians are in each community.

In Iraq, faith is under attack in a very violent way. It is not a matter of debate and discussion—that does not exist here. It is simply murder, kidnapping, torture, rape and the forced payment of jazeera tax, an Islamic tax forced on non-Muslims simply in order to be allowed to exist. We never know who will be targeted amongst our people, but we do not fear, and our place is not sad, but full of joy. Despite the constant tragedies, our people are not sad and our church is not despondent.

What is disturbing is much of the violence is in God’s name. Violence is often justified as being the work of God amongst the infidels. Almost every religion I know has been guilty of committing violence in God’s name, even in Christianity—the Crusades may have been a long time ago, but there have been many other occasions when violence has happened in the presence of Christians and the majority have done nothing

For the attackers, Iraqi Christians are infidels because they do not accept Mohammed. Christians are often also accused of being connected to the West. The fact that the Christian faith started in the Middle East is not known by many. To many of the Islamic terrorists, everything about the West is negative and Christian. The promiscuity, radical liberality and lack of virtue are seen as a Christian phenomenon. It is the Christians who are seen by many as those who have attacked Iraq. Some have even compared it to the Crusades. For this reason, Christians are often not seen as being properly Iraqi. They are connected to those who have invaded them.

So our faith is under attack. The risks are real, but there is no systematic approach that will prevent this torture. We may wish there was, but there is not because there is no way of preventing the presence, proclamation and practice of our faith. This is the heart of our faith in the Almighty who promises never to leave us or forsake us. In the midst of the difficulties we know without doubt our God is the only way through. We know our Lord has informed us that our faith will indeed be under attack, and as we get closer to His return, this will not get better but worse. We take hope from the fact that we are under attack because we believe and know we are trusted by our Lord to persevere—and we will.

Reverend Canon Andrew White is the vicar of St. George’s Church in Baghdad, Iraq. He also serves as president of the Foundation for Relief and Reconciliation in the Middle East.