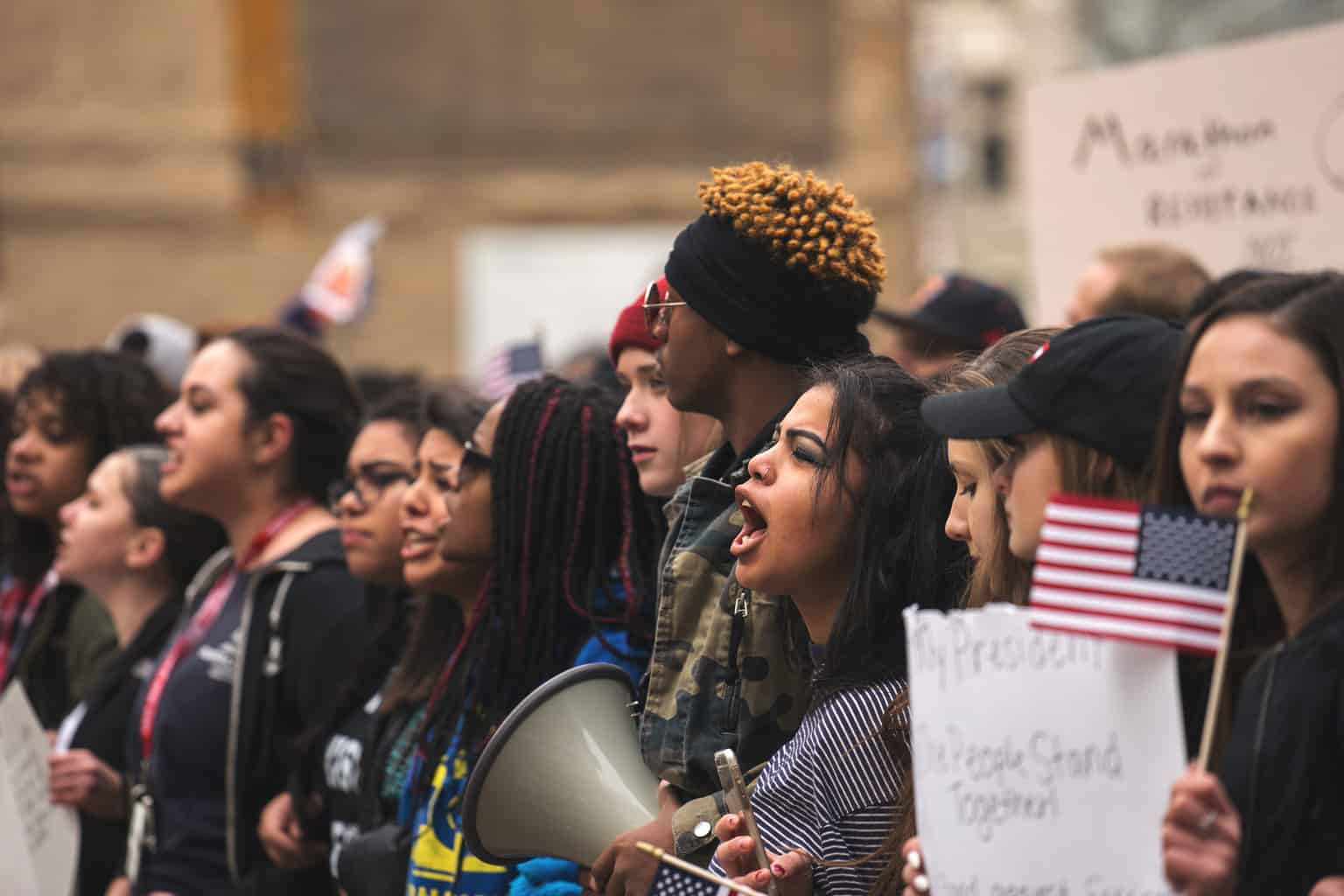 The world is a noisy place. Smart phones. Smart watches. Alerts. Notifications. Social media. Satellite radio. Streaming video. News 24/7. On any given Sunday morning in church, don’t be surprised if you hear a guitar or keyboard playing softly in the background during the announcements or prayer. Culturally, it’s almost as if we are uncomfortable with silence.

Yet when people rise up and collectively make some noise, public displays of personal opinions are often closely monitored and critiqued. I was raised to believe public protests were dangerous, disrespectful, disruptive and, therefore, inappropriate. Those adjectives have been used frequently to describe recent protests against white supremacy and for immigration reform.

I first learned that public protests were considered inappropriate after finding myself accidentally attending and then willingly participating in protests against increasing U.S. military presence in South Korea while on a trip there, my homeland. I had left South Korea as an 8-month-old and returned as a college student on a church missions/cultural enrichment trip. I developed friendships with Korean college students who were active in the student protest movements. They spoke about feeling voiceless but also about finding power and common purpose as they protested together and leaned on one another for courage.

I learned about liberation theology and minjung theology, an indigenous theology born out of Korea’s post-war struggle and emergence. I honestly didn’t know what to do with it all, especially the theology that tapped into a cultural value of community and harmony that didn’t exist in the individualistic theology of the West. At first I listened to the history of the student protest movements, safely observing from the sidelines. But within the first month of our trip, most of our group was participating—we learned the chants, carried bandanas to protect ourselves from the tear gas and were well-versed in making Molotov cocktails.

It turns out that government monitoring of public protests doesn’t happen just in the United States. My uncle, who worked for the South Korean government, showed up completely unannounced one random afternoon at the office where we were meeting. He came carrying pizzas, but his presence was an indirect warning to make sure his niece stayed out of trouble, stayed safe and stayed silent. I wouldn’t take part in a public protest for another 20 years.

I tell that story because I still feel new to exercising my right to peaceably assemble. It’s not something I have always been drawn to. Using my voice has mostly been through speaking and writing, not using my body in protest. But as my convictions have deepened and life experiences have changed me, I’ve chosen to march in support of #BlackLivesMatter and against the Dakota Access Pipeline, the Muslim travel ban and a recent president. Bethany and I also marched together with three Asian American friends at the Women’s March on Washington in January 2017 because we wanted to make sure our voices were both seen and heard as Christian women of color. I find the news coverage, police presence and public commentary around those events fascinating. Different voices—such as women, people of color, LGBTQIA—are critiqued, praised, dismissed, ignored or judged on who should or should not participate. Why can’t someone participate if they want to?

Public protest and free speech are protected under the law, but that doesn’t mean there aren’t consequences. There are days when it feels like you can’t win. If you stay silent, you might find yourself on the wrong side of history. Or you might be seen and heard, and then wish you hadn’t. Demonstrations from Charlottesville to Venezuela have proved deadly and dangerous for protesters. You might find yourself completely misunderstood after speaking up. Even worse, instead of believing your accounts of experiences with racism or injustice, people question your perspective or accuse you of exaggerating, lying or playing the race card. They reframe your story and change it to make it appear that you were actually the aggressor. After being attacked for sharing, you might even begin to question your memory of the experience. But then you’ll realize the truth—you were the victim of a racist or unjust incident and now have been gaslighted by those who don’t want to believe you.

It’s no wonder people are opting out of social media, trading in their smartphones and deciding it’s better to stay out of the public and even private square. It’s become a common Lenten practice for some to give up social media or temporarily deactivate their social media accounts. I have one friend who has gone back to using a basic flip phone to force him from engaging in the public sphere when he’s away from a computer.

At some point in our lives we learn to communicate, whether verbally or non-verbally. But most of us are also taught to silence ourselves or to stay out of the conversation for self-preservation. We are taught to avoid conflict, keep the peace and keep our personal opinions to ourselves because we’re told that speaking out doesn’t actually affect change. However, self-preservation takes on a different sense of urgency and meaning as the national and global political landscape continues to shift. The North American Church is again engaging in conversations around race and justice, but because of its past failures and current blind spots, the conversation often resorts to simplified binaries such as white and black, men and women, privileged and lack of privilege, citizen and undocumented—and the refusal to dig deeper into racist and unjust systems can widen the chasm.

I believe that Christians desire and can handle more complexity. Race and reconciliation can no longer be framed solely as a justice issue but rather as core to the Gospel, theologically grounded in the Imago Dei (the image of God). As Christians, if we truly believe we are all created in God’s image, and that God the Creator had a hand in developing, creating and shaping not just our embodied souls but also the places and spaces we steward and have dominion over, then reconciliation with one another is not merely an option—it’s part of God’s mandate. It requires us to speak up and speak out.

Russell Moore Has Announced His Resignation From the SBC

In order to do so, we need to address personal development, which happens within the context of community. In some communities, certain voices are erased and suppressed while others are amplified and elevated. The concept of “voice” isn’t only what is said or written but also includes how identity is expressed in words and deed. Voice is not limited to what comes out of my mouth but out of my being.

The Latin word vox, meaning “voice,” and the related word vocāre, meaning “to call,” give us the root voc or vok. Words from the Latin vox or vocāre have something to do with the voice or with calling. Anything vocal is produced by the voice. A vocation is the work that someone is called to do as a job. To evoke is to call forth. To invoke is to call on for aid or protection. To provoke is to call forth another’s anger. The word voice also has vox as its root.

The challenge to raise your voice is about doing the good work of the good news. It’s about calling forth others: an invocation for all and a provocation to some. Our lives should affect the world around us if we are bearers of God’s image as well as an embodiment of good news. Living as a Korean American Christian woman, there is something critical about speaking from a place of wholeness and uniqueness that makes my voice part of a community but also uniquely mine. It fills in the blanks left in others’ stories. When more of us from different intersections and margins raise our voices, we live a fuller picture of the Good news.

is a speaker, journalist, and activist. She has worked in campus ministry for more than twenty years, with expertise in issues of gender, ethnicity, justice, and leadership development. She is a columnist for Sojourners magazine, a writer for Faith & Leadership, and a coauthor of More Than Serving Tea: Asian American Women on Expectations, Relationships, Leadership and Faith.

The Unforgivable Sins of ‘13 Reasons Why’