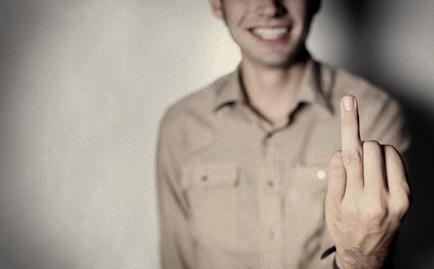 Sometimes I wish God would leave me alone to do what I want with my life. But then I’m reminded that it has always been better to save myself from the heartache of disobedience, especially when it’s only to learn what I already knew.

More specifically: I’m not brave enough to say that I’m going to live the rest of my life as an unmarried man, but it sure seems like that’s what Jesus sets as the standard.

We usually attribute this philosophy to Paul, but he was just parroting Jesus from the book of Matthew when Jesus said that some people “… have renounced marriage because of the kingdom of heaven. The one who can accept this should accept it.”

There we have it. A new standard—singleness—which is, if you’re willing, going to force you to shift your perspective. The old way of life was to walk around asking, “Who should I marry?” The new way of life is asking, “Does God want me to marry?”

1 Corinthians 7 seems like one of the most avoided passages in the Bible.  But, with a few exceptions of teachings on divorce earlier in the New Testament, 1 Corinthians 7 is the first teaching we see on the idea of marriage.

Verse one starts with this: “Now for the matters you wrote about: It is good for a man not to marry.”

It does seem poignant that this is the first instruction on marriage in the New Testament, and it says something that our society (and our hearts at times) are so averse to hearing it. The discomfort the implications have for our lives force us to rush on to verse two which says:

“But since there is so much immorality, each man should have his own wife, and each woman her own husband.”

Paul’s reasoning for this is so that “Satan will not tempt you because of your lack of self-control” and is quick to distinguish in verse six that his advice to marry is said “as a concession, not as a command.”

Or rather that people are not commanded to marry but they may marry as a result of a lack of self-control.

Now, I’ll pause here and say that I’ve felt how you’re feeling. If you’re thinking, “I’m glad someone has finally decided to write about this,” we’re on the same page. Interestingly enough, two groups who usually resonate with these passages are: people who have decided to make use of the freedom of their singleness for the sake of the Kingdom and people who have been married for decades.

If you’re thinking, “This guy just hasn’t felt what it’s like to be ‘in love’ and that’s why he can say this,” trust me. I take issue with the term "in love," but I certainly know how it feels to be enamored of another person. From my experience, this response comes from people who are in a dating relationship or have been married for less than 10 years.

The one common thing said in response to these verses that I take issue with is the altruistic, “Listen, being married has been the most selfless act I have ever engaged in.” I understand the sacrifice of time and will associated with being in any relationship, but the true question is not whether or not we’re sacrificing but for what we are sacrificing. With this, we’ll return to 1 Corinthians and to what seems to be the foundational reason for this conversation. Verses 32 through 35 say:

This passage has much broader implications than marriage. This, to me, is the foundation for any decision we make in our lives. There are plenty of reasons we decide to do the things we do: enjoyment, comfort, fear, satisfaction. But what I’ve come to see is that when I’m focused on pursuing the things of God (which I know is not all the time, but I pray is in increasing amounts), every decision I make is based on the four verses above. My desire is to turn my focus away from myself and to the things that God is doing to advance His Kingdom on the earth.

After the Gospels, we come to the book of Acts which shows the apostles mobilized for the work of the Kingdom. They are not a people characterized by a normal life of settling down. They are a people who are actively moving forward in advancing the love of God. That’s what this is all about. Both Jesus and Paul, when speaking about marriage, treat it as a second option, not as the standard for life. But for most of us, it is an acceptable unchecked indulgence that results in an increasingly divided life.

But look at the passion of Paul in 2 Corinthians 11:2: “I am jealous for you with a godly jealousy. I promised you to one husband, to Christ, so that I might present you as a pure virgin to him.”

God desires every piece of you and me. Therefore, we have a responsibility to address this issue no matter how difficult it is. Before we consider a romantic relationship, we must start here and listen for the voice of God to direct us and strengthen us in our asking. We must regain the courage to stand on the strong foundation of Christ and seriously consider the words of Scripture. We will have to run from the fear of loneliness and the lure of comfort and ask God if there are bigger plans for our lives than those we’ve created for ourselves.

Cole NeSmith is the Creative Director at STATUS, a campus of Discovery Church in Orlando, FL. You can read more about this topic in a three part series about relationships on Cole’s blog, http://www.colenesmith.com.

“Brick City”: Rebuilding From the Heart Up

Even in a Death, Jesus Is Big Enough