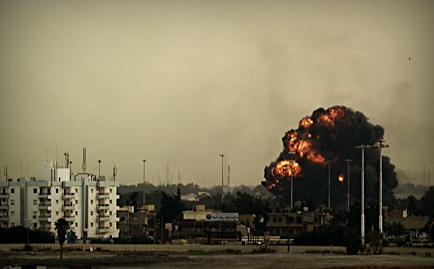 My theology was shaken this week. Spending time in Thailand and India, I was able to walk through red-light districts and peer into the eyes of women who had been shoved into the sex trade as young as 10 years old. Many American Christians love to preach a Christian gospel that promises happiness and health. How does our faith speak to such things?

As I read the sacred Christian Scriptures, I’m struck by the unbroken command to defend the marginalized (Isaiah 1:17) and “do justice” (Micah 6:8). I’m swept up by the clear message that God “takes up the cause of the oppressed” (Psalm 146:7). I’m convicted by the teaching that “the righteous care for the justice of the poor” (Proverbs 29:7). It was Jesus Himself who declared He had come to “preach good news to the poor … to proclaim freedom for the prisoner” (Luke 4:18). Those who, like Glenn Beck, argue against an ethic of social justice must not read the same Bible I do.

At the same time, the Bible seems to highly exalt peace. Who can ignore Jesus when He stands upon a mountaintop and declares, “Blessed are the peacemakers” (Matthew 5:9)? I question American Christians who support imperialistic philosophies, participate in unnecessary saber-rattling, and endorse wars that will undoubtedly steal the lives of innocents.

And then there is Libya.

This country is ruled by an oppressive tyrant, and yet remarkably the drumbeat of freedom still beats in the hearts of its citizens. As I watched the situation unfold from Asia, cut off from American media, I found myself struggling to answer this question: When a man like Moammar Gadhafi insists on oppressing Libyans and is even willing to kill his own people, how should followers of a peace- and justice-loving Jesus respond? How can we do justice in this situation and still be the peacemakers Jesus asks us to be? The answer is not an easy one.

Today, I support the action taken by the international community and President Obama to hear the cries of innocent Libyans and take military action. Perhaps tomorrow I will question myself. This kind of wrestling with so weighty an issue is exactly what American Christians should be doing, I think. If we do support forceful intervention, we should do so with tears in our eyes.

It is clear that Christians must fight against oppressors and for the oppressed. How to best do that must be worked out among those who bear the name of Christ. We can only hope that the God who loves both justice and peace will grant us wisdom in a time like this when we need it most.

What do you think?

Jonathan Merritt is a faith and culture writer and author of Green Like God: Unlocking the Divine Plan for Our Planet. This article originally appeared in The Washington Post’s "On Faith" section and is used by permission.

The Philosophy of the Decemberists