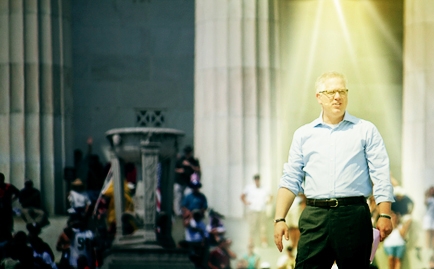 A Mormon television star stands in front of the Lincoln Memorial and calls American Christians to revival. He assembles some evangelical celebrities to give testimonies, and then preaches a God and country revivalism that leaves the evangelicals cheering that they’ve heard the gospel, right there in the nation’s capital.

If you’d told me that 10 years ago, I would have assumed it was from the pages of an evangelical apocalyptic novel about the end-times. But it’s not. It’s from this week’s headlines. And it is a scandal.

Fox News commentator Glenn Beck, of course, is that Mormon at the center of all this. Beck isn’t the problem. He’s an entrepreneur, he’s brilliant and, hats off to him, he knows his market. Latter-day Saints have every right to speak, with full religious liberty, in the public square. I’m quite willing to work with Mormons on various issues, as citizens working for the common good. What concerns me here is not what this says about Beck or the “Tea Party” or any other entertainment or political figure. What concerns me is what this says about the Christian churches in the United States.

It’s taken us a long time to get here, in this plummet from Francis Schaeffer to Glenn Beck. In order to be this gullible, American Christians have had to endure years of vacuous talk about undefined “revival” and “turning America back to God” that was less about anything uniquely Christian than about, at best, a generically theistic civil religion and, at worst, some partisan political movement.

Rather than cultivating a Christian vision of justice and the common good (which would have, by necessity, been nuanced enough to put us sometimes at odds with our political allies), we’ve relied on populist God-and-country sloganeering and outrage-generating talking heads. We’ve tolerated heresy and buffoonery in our leadership, as long as with it there is sufficient political “conservatism” and a sufficient commercial venue to sell our books and products.

Leaders will always be tempted to bypass the problem behind the problems: captivity to sin, bondage to the accusations of the demonic powers, the sentence of death. That’s why so many of our Christian superstars smile at crowds of thousands, reassuring them that they don’t like to talk about sin. That’s why other Christian celebrities are seen to be courageous for fighting their culture wars, while they carefully leave out the sins most likely to be endemic to the people paying the bills in their movements.

Where there is no Gospel, something else will fill the void: therapy, consumerism, racial or class resentment, utopian politics, crazy conspiracy theories of the left, crazy conspiracy theories of the right; anything will do. The prophet Isaiah warned us of such conspiracies replacing the Word of God centuries ago (Isaiah 8:12–20). As long as the Serpent’s voice is heard, “You shall not surely die,” the powers are comfortable.

This is, of course, not new. Our Lord Jesus faced this test when Satan took Him to a high mountain and showed Him all the kingdoms of the earth, and their glory. Satan did not mind surrendering his authority to Jesus. He didn’t mind a universe without pornography or Islam or abortion or nuclear weaponry. Satan did not mind Judeo-Christian values. He wasn’t worried about “revival” or “getting back to God.” What he opposes was the Gospel of Christ crucified and resurrected for the sins of the world.

We used to sing that old gospel song, “I will cling to an old rugged cross, and exchange it some day for a crown.” The scandalous scene at the Lincoln Memorial indicates that many of us want to exchange it too soon. To Jesus, Satan offered power and glory. To us, all he needs offer is celebrity and attention.

Mormonism and Mammonism are contrary to the Gospel of Jesus Christ. They offer another Lord Jesus than the One offered in the Scriptures and Christian tradition, and another way to approach Him. An embrace of these tragic new vehicles for the old Gnostic heresy is unloving to our Mormon friends and secularist neighbors, and to the rest of the watching world. Any “revival” that is possible without the Lord Jesus Christ is a “revival” of a different kind of spirit than the Spirit of Christ (1 John 4:1-3).

The answer to this scandal isn’t a retreat, as some would have it, to an allegedly apolitical isolation. Such attempts lead us right back here, in spades, to a hyper-political wasteland. If the churches are not forming consciences, consciences will be formed by the status quo, including whatever demagogues can yell the loudest or cry the hardest. The answer isn’t a narrowing sectarianism, retreating further and further into our enclaves. The answer includes local churches that preach the Gospel of Jesus Christ, and disciple their congregations to know the difference between the Kingdom of God and the latest political whim.

It’s sad to see so many Christians confusing Mormon politics or American nationalism with the Gospel of Jesus Christ. But, don’t get me wrong, I’m not pessimistic. Jesus will build His church, and He will build it on the Gospel. He doesn’t need American Christianity to do it. Vibrant, loving, orthodox Christianity will flourish, perhaps among the poor of Haiti or the persecuted of Sudan or the outlawed of China, but it will flourish.

And there will be a new generation, in America and elsewhere, who will be ready for a Gospel that is more than just Fox News at prayer.

Dr. Russell D. Moore is an author and Dean of the School of Theology and Senior Vice-President for Academic Administration at The Southern Baptist Theological Seminary. This article originally appeared on his blog. Used by permission.

The Strength of Small