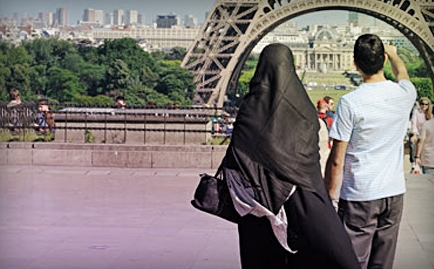 In the past few weeks, around 65 women in France have been arrested for protesting against the internationally famous “burqa ban.” These women took to the streets in defiance of the new law, covered head to toe, to protest the French government’s ban on certain garments worn mostly by followers of Islam.

First, it is important to know what a burqa is. It is the full body dress that loosely covers a woman’s entire body. It is both religious and cultural, just as Islam is both a religion and a culture. It is a symbol of humility before God in Islam.

The burqa ban, as it has been called, extends from a 2004 law that bans most or all prominently displayed religious garments—such as large crosses, head scarves and “I heart Buddha” T-shirts—in public schools. This is not unlike bans of gang-related or immodest clothing in public schools in the U.S. It is generally agreed, even in the U.S., that stepping into a public school means that you—especially if you are a student—give up a modicum of rights.

But this newest ban, which went into effect the week of April 14, takes things a step further and makes it a matter of public safety and applies the law to the general population. No woman is allowed to wear a full burqa in public on the streets of France. The French legislators, in many ways, present it as a protection of women’s rights. The burqas, they say, are used as tools of oppression by the men in Islamic households, men who use this sort of strict clothing code as a form of abuse.

The other narrative we get about the bill is that it’s a security issue, a matter of public safety. However, the law has an exemption for events like performance art and theater, which negates the argument from a security standpoint. This tells us clearly that the main purpose of the law to protect women.

French President Nicolas Sarkozy has said that protecting women from abuse is far more important than the secondary security reason. When the ban first came up for consideration in 2009, Sarkozy said: “In our country we cannot accept that women be prisoners behind a screen, cut off from all social life, deprived of all identity,” going so far as to say that the “burka [sic] is not a religious sign.”

With all the fuss and hub-bub, the question then becomes: Are we protecting women and their identity, or are we violating their rights to decide how to present themselves?

Sarkozy’s point seems to be that one cannot call themselves French and still insist on wearing the burqa. In America, we have had similar debates, though never an actual specific law like France’s. Before us, now, we have the question of religious liberty: what can the state legislate when it comes to religious freedom?

For the Christian, this is a very important question. Like in Islam, the millions of Christians in America express their faith in a myriad different ways, often in ways that butt up against the judicial power of the state. For example, in parts of the rural South, there is an odd charismatic denomination that practices connection with the Holy Spirit by handling poisonous snakes in their church services. Kentucky, Tennessee and Alabama all have laws on the books that outlaw this practice when it is done in a manner that endangers the life of another person. This is the sort of infringement on civil liberties that seems to be fine with most members of society—they are not allowed to practice their religion in a manner that harms another human being. To some extent, there is a line at which the state can legislate religious expression and usually that line is the abuse of another human.

So where is this line with the burqa? Is France within its rights as a secular state to legislate to “protect the women”?

Short answer: No, France does not have a right as a secular state to impinge on the religious decisions of a minority population, especially one that does not harm another human.

Dr. Robert Jeffress Admitted that Joe Biden Won the Election — Or Did He?

This is where the Christian’s stance on the burqa ban becomes fuzzy—one could argue, quite easily, that protecting women from the abuse of their husband or male relatives is an important enough reason to support France’s move—that there is a line where abuse is taking place. But there is also the argument that there is little to no evidence that this abuse is epidemic, especially in the West. It seems to be more—based on the testimonies of Muslim women in Western countries—that these women choose to wear the burqa, not that they are forced to do so. There are numerous, varied reasons as to why women wear such clothing, and the law acknowledges only one of them.

And that, essentially, is what it comes down to: The law treats the issue as though Islam is one monolithic entity, when, just like Christianity, Islam is a mix of different denominations, practices, thoughts and beliefs, from the very conservative to the very liberal. According to researchers at the Pew Forum, there are 1.57 billion Muslims worldwide. For us to say, every time we see a woman in a burqa, that they are participating in an oppressive, abusive practice and should be ashamed of themselves is to deny the multifaceted decisions that go into religious wear, just as it is a false assumption to say that every church in America supports the practice of snake-handling as an experience of God.

To outlaw a legitimate and common expression of religion by painting it as abusive is to make a sweeping generalization about the religion as a whole, one that Christians should object to whether it is happening with burqa-wearing women in France or with conservative Amish who wear head coverings in the United States.

No matter which way you slice it, the burqa ban does not save the woman involved—it punishes her, either for choice she didn’t make (i.e., an abusive family who makes her wear it) or for the choice she did. It would make much more sense for those outside the system of Islam to treat the use of the burqa on a case-by-case basis—like the questions of snake handling in the South, where the case is examined as to whether or not actual abuse took place. Christians should defend the freedom of their Islamic neighbors to practice their religion, just as we hope they would defend ours.

Dianna Anderson writes a blog about social change, women’s issues and theology, which can be found at http://www.dianndia.blogspot.com. She lives in Sioux Falls, SD.

More than 400 Dead in Syria This Month