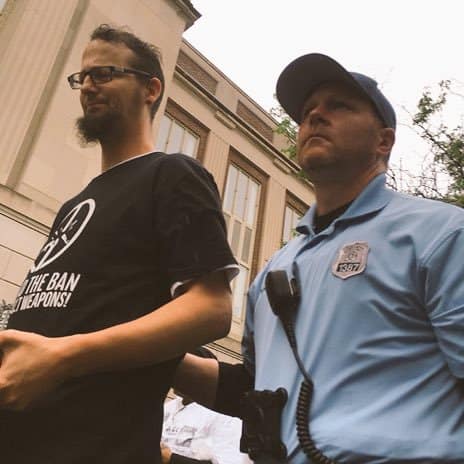 Three months after the Parkland school shooting, the conversation about gun control has largely left the forefront of the national conversation. That’s the problem Demand the Ban is trying to solve.

We are working together this year to DEMAND THE BAN on semi-automatic assault weapons, and organizing an action on May 16 in Philadelphia.

Toomey was chosen, according to the website, because he co-sponsored a 2013 bill to expand background checks for gun sales. He was also endorsed by anti-gun violence organizations, which helped him win re-election. Therefore, the coalition decided that, “It’s time for Senator Toomey to earn his reputation as a national leader to prevent gun violence. Since he has refused to meet with Demand the Ban organizers to discuss a ban on assault weapons, we are mobilizing people from Pennsylvania and throughout the United States to bring the Demand the Ban to Senator Toomey’s office.”

Prior to the action, participants were warned they could possibly be arrested and learned nonviolent protest tactics.

Shane Claiborne was among those arrested.

Dr. King said that initially he was uncomfortable going to jail… but then he looked at history and saw what good company he had. #DemandTheBan pic.twitter.com/556tqPbZHD

Was blessed to be a part of a public witness and act of civil disobedience with my brother @ShaneClaiborne & several other good souls yesterday to #DemandTheBan on assault weapons. Change is coming. Peace is coming. #Enough pic.twitter.com/cJwF5E6mou

Marching yesterday in Philly to demand a federal ban on assault style weapons. Met many survivors of semi-auto gun violence & murder. We ended at Sen. Pat Toomey’s office. I appealed to his Christian conscience and asked him to exercise moral courage and push for the ban. Enough! pic.twitter.com/sgAcsWYQX5

I must say my pal Doug @pagitt looked like royalty today as the police carried him into custody. #DemandTheBan pic.twitter.com/jE9eIp7KDv

Demand the Ban also has an interesting initiative where they will melt down assault weapons and turn them into useful items, like gardening tools.

Praying with our feet, and watching a rifle be turned into a gardening tool. pic.twitter.com/xgMlrpY3Ce

My sister @movitajh holding the plow we made from an AR-15. Her son was killed by an assault weapon. #DemandTheBan pic.twitter.com/MWy9cv4uJa

Why You Should Speak Up Even If No One’s Listening