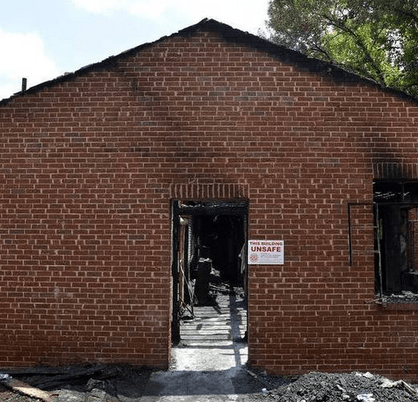 Across the South, several predominantly black churches have been damaged—some completely destroyed—by fires since June 21, just days after a racist gunmen killed nine people at South Carolina’s historic Emanuel African Methodist Episcopal Church. Investigators believe that at least three of the six were caused by arson. At one church in South Carolina, no cause for the fire has been found, and though the two other fires appear to have causes other than intentional arson, investigators are still looking into them. A fire chief in Gibson County, Tennessee, told his local news station that though lightning is thought to be the cause of a local church burning, “We want to be sure, 100 percent sure, that this was an accidental fire, not on purpose.”

The FBI is investigating the fires, though at this point they are not sure any are linked, several are believed to be the work of arsonists. This Sunday, members of Charlotte’s Briar Creek Road Baptist Church met at the site of a large fire that resulted in its main building being demolished. There, Rev. Rhonda Kinsey told the congregation, “I am standing on your shoulders. I am leaning on you. Part of our heart was consumed. Thank God, He is a heart-fixer.”

Woman Struck by Lightning at Airport

ISIS Beheaded Two Women and Their Husbands, Accusing Them of Witchcraft