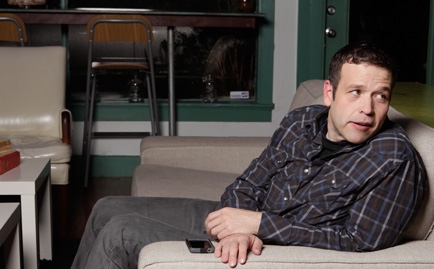 On Sept. 16, 2010, Donald Miller announced on his blog that, after a year trying unsuccessfully to raise money for the movie adaptation of his bestselling book, Blue Like Jazz, he and the film’s co-creators, director Steve Taylor and cinematographer Ben Pearson, were putting the project on hold for the foreseeable future. “The book that swept the country will not sweep theaters,” Miller wrote. What happened next is a reminder that there is probably no such thing as a foreseeable future.

A few days after Miller’s blog post, two guys in Franklin, Tenn.—Zach Prichard and Jonathan Frazier—put up a website called SaveBlueLikeJazz.com. Their goal was to raise $125,000 in 30 days, the bare minimum needed to keep the film on life support. Donations started to pour in and, incredibly, the campaign reached its target in 10 days. By Day 30, donations totaling more than $345,000 had been received from about 4,500 contributors. With an average contribution of about $75, Blue Like Jazz: The Movie became the biggest crowd-sourced project in American history. With principal photography set to begin in Nashville today, RELEVANT caught up with Ben Pearson, the film’s cinematographer and co-screenwriter.

Ben, before I ask you about how the film was saved, I guess I want to ask about how the project almost died. What were the circumstances that led you and Don and Steve to announce that the movie was going to be put on hold indefinitely?

You know that verse “Hope deferred makes the heart grow faint” [Proverbs 13:12]? [Pearson laughs.] We had so many people supposedly come on board, and they would take a lot of time talking about bringing in a certain increment of funding, and it was almost like they would waste Steve’s time, or they just didn’t feel the project was worth funding or they got cold feet. And of course it’s just a terrible time to get funding for any film like this. It was a combination of things.

It got to the point where Steve [Taylor] was saying, “Buddy, if it doesn’t happen this year, I really don’t see it happening in 2011.” He called Don and said: “We’ve been down this road so many times with investors. We’ve got our foundation—the folks who are there with a little less than half the money we need—but we’re not…” We had these people who would get on board and then pull out at the last minute, and that was just really frustrating. That’s what happened right before Don blogged and said, “For now, it’s put on hold. Sorry.” And then the rest is history.

After so many months cycling between optimism and frustration, what was your reaction when you heard about Jonathan and Zach’s campaign to save Blue Like Jazz: The Movie?

Before he blogged that the movie was being put on hold, Don told Steve and I: “Hey guys, we’ve got a great script, and [A Million Miles in a Thousand Years] is all about us getting together to make this movie. But as far as fundraising for Blue Like Jazz: The Movie, we don’t have a good story yet.” A couple days later, SaveBlueLikeJazz.com goes up and people start donating. And I’m like: “Oh my word, we might be on the verge of a really great story. The people are putting their money where their beliefs are!”

I had so much hope when I saw the initial video Jonathan and Zach did. We knew the people were out there. I said when we started this project: “There’s a sleeping giant out there. People know they are not alone because of the book Blue Like Jazz.” And so the people started to put the money where their beliefs are and their hearts are, and they made it happen. It’s insane.

And we still don’t have enough money, but we’re doing it anyway!

We always envisioned this film with a bit more of a budget. And now it’s a matter of honest filmmaking. There was the ideal, and now there’s the actual. You have to embrace both and continue the pursuit of excellence. We haven’t got money for a huge 45-foot crane to pan over the bigger scenes. But we’ve got enough money to shoot the movie and get it in the can. And, Lord willing, if we get a good rough [cut], we can get enough for finishing fees.

And what was your reaction when you realized the Save Blue Like Jazz campaign was going to reach its target of $125,000?

I was with Stevie [Taylor, the director]. We were together that morning and the target was encroaching and it was great. He’d get updates on his iPhone. For a while, I’d thought it might stall at $95,000, and then it was going to be this long drawn out process—couple dollars here, couple dollars there. I believed we were going to make it, but I thought it was going to take a lot longer.

But we were together that day. We went and got lunch at our favorite Vietnamese place and just hung out. Steve called his wife, Deb, and said: “Sweetie, we were together in Paris when the clock turned over on the year 2000. I wish you were here now.” And she said she’d try to get to the restaurant to be with us. She showed up and it was just amazing to see the sum turn over together.

It was just kind of—[Pearson chokes up]—it was pretty emotional. Another thing about Steve’s optimism, he usually doesn’t choke [up], but he choked when he prayed for our meal.

It’s incredibly humbling. The script we have is a complement to the book, as the book is a complement to the script. It puts the fear of God in you, because I know people are responding primarily to the book. Lord willing, they will see the script for what we wanted it to be: “If you like the book, you’ve got to see the movie. If you like the movie, you’ve got to read the book.” Don was adamant about that from the very beginning.

As an experience, it calls me up into a new level of excellence. It’s not Steve’s film, Don’s film or my film anymore. It’s everybody’s film. [He chokes up again.] And that, my friend, is extremely humbling. We’ll do our best and see where the journey takes us. Nothing like this has ever happened in our experience. It’s called us up to a new level. We’re still confined by budget and everything, but everybody on this team knows this is an incredibly unique project. A lot of people have signed on; the crew is a large one. But they’re saying, “I know you can only pay me this much, but, you know what, I really want to do this film.” So it’s our film now. It’s extremely exciting.

a Portland-based freelance writer, is the Deputy Editor of the Burnside Writers Collective
.

Why Are Classrooms Empty in Uganda?