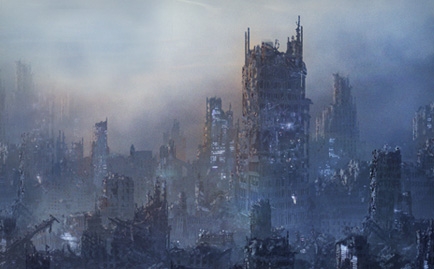 It seems a good time to revisit the fact that WE’RE ALL ABOUT TO DIE.

Or be “caught up in the air,” as believers. Or be judged. Or at least be made very uncomfortable for a few months. That’s the belief of a handful of religious groups who are predicting that, on May 21—this Saturday—the Rapture of believers will occur, followed by no less than the destruction of the universe on Oct. 21, 2011.

They’re led by Harold Camping, the president of Family Radio and a long-time end-of-the-world prognosticator who first predicted the Rapture would occur in September of 1994 but was wrong. But this time he says he won’t be wrong because he has figured out the Bible and “the Bible guarantees it,” as his billboards state.

The blog American Jesus has an interview with Gunther von Harringa, who not only has an arch-villain-y name but is also the president of Bible Ministries International, a broadcasting ministry connected to Camping and Family Radio. The interview is noteworthy for the sheer confidence and certainty on display.

The interviewer asks von Harringa, “just for the sake of argument,” whether there might be a back-up date in case the Rapture does not occur on May 21. (Kind of like what happened with Camping’s 1994 prediction.) Might God change His mind since someone apparently figured it out? Von Harringa replied:

God will not change His mind because He Has given us the accurate date in order for genuine believers to warn their families, friends, and the world at large, as He commands in Eze. 33:7, “So thou, O son of man, I have set thee a watchman unto the house of Israel; therefore thou shalt hear the word at my mouth, and warn them from me.” There are also no other “back-up dates” because the Bible guarantees this with many proofs and much evidence … it WILL happen, and NOTHING can prevent it.

There is no back-up date because “the Bible guarantees this.” Wow. This reminds me of another major doomsday prediction, when Edgar Whisenant predicted that the Rapture would occur sometime during September 13-15 in 1988 (his best-selling pamphlet was called 88 Reasons Why the Rapture Will Be in 1988). Whisenant did a big media tour and announced on several occasions that “only if the Bible is in error am I wrong.”

Camping and his followers aren’t even willing to admit that they (or the Bible) could be wrong. There’s no back-up plan.

At American Jesus, the interviewer presses the issue, asking if von Harringa would be willing to schedule a follow-up interview for sometime after May 21, just in case. The answer was NO. But less gentle: “Because of the utter devastation that will engulf the entire world an interview would be virtually impossible; moreover, by God’s mercy, I don’t plan on being here.”

That’s some serious confidence. And I guess we should believe him when he says there is nothing more important than getting this message out (after all, that’s why God allowed us to figure out the date, they say, thus the ubiquitous billboards and signs, and all the statements about how they need to “warn the world at large”). But the fact remains that, for decades, Harold Camping and Family Radio have been buying up commercial radio broadcasting frequencies in major markets like New York, Philadelphia and Washington. These FCC broadcasting licenses are easily worth millions of dollars. If Camping wanted to sell them, he could. He would have buyers lined up across the country. And if he is right about the Rapture and ensuing “utter devastation” on its heels—if an online interview will be virtually impossible for von Harringa—won’t these licenses and frequencies also be useless after May 21? Won’t radio broadcasts be fairly difficult during an apocalypse?

So why is he keeping them? Wouldn’t those potential millions go a long way in spreading his doomsday message, in a last-ditch effort of billboards and bus benches and bumper stickers? Is it more important to warn the world or to retain his radio empire? Any chance he thinks he might still need those licenses on May 22?

Let me go on the record by saying: Yes. Of course, he will. (And I’m not the only one who thinks so)

This is why: Since the time of Christ, there have been thousands and thousands of predictions of the end of the world. None of them have been correct. NONE. Zero-for-thousands is a horrible batting average, and to think YOU are the only one who’ll be correct, in all the history of mankind, is the Mt. Everest of arrogance.

Jason Boyett is an author and blogger and is generally an expert in all things apocalyptic since he wrote The Pocket Guide to the Apocalypse. This article was originally posted on his blog and is used by permission.