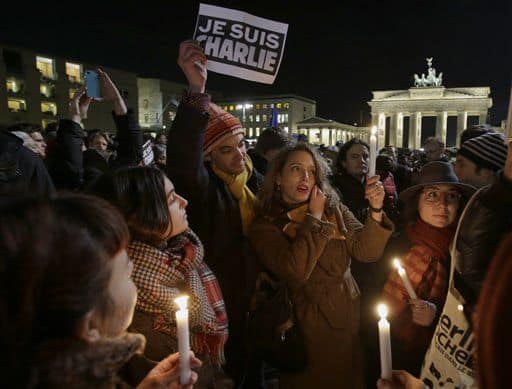 The AP is reporting that officials have identified three suspects in the shootings that left 12 dead at the offices of Charlie Hebdo, an Onion-esque French satirical newspaper. Two are brothers in their mid-thirties, named Said and Cherif Kouachi. The other is an 18-year-old boy named Hamyd Mourad. One official is saying the three have been linked to an al-Quaida network in Yemen. The older Kouachi, Cherif, has reportedly seen jail time for attempting to wage jihad in Iraq. Liberation is reporting that the suspects have also been “located,” but did not give any further details.

In the meantime, thousands of French mourners showed up for a candlelight vigil to remember the slain journalists, who had made headlines for controversial jokes about Islam. All over the world, hundreds of thousands of social media users declared #JeSuisCharlie in solidarity with the magazine …

Update: According to NBC, one shooting suspect is dead and two others are in custody following a police raid.

Update 2: Looks like NBC jumped the gun. Hamyd Mourad, the youngest suspect, has turned himself into police. The two brothers remain at large.

Yes, Nike Will Have ‘Back to the Future’ Shoes This Year.