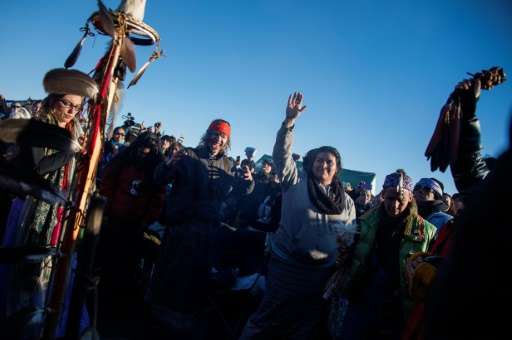 Yesterday was a huge victory for protesters of the Dakota Access Pipeline. The US Army Corps of Engineers announced that they will not grant Energy Transfer Partners permission to extend the project beneath the Missouri reservoir—which is on land on the Sioux Tribes Standing Rock reservation.

Hundreds of people have been camping out and standing against the construction of the pipeline, according to reports, because they think the whole project poses a major environmental threat to the Standing Rock Sioux tribe and its cultural sites. Many thought the announcement would prompt the protesters to pack up and head home, but this morning the people have made it clear that they aren’t going anywhere.

Many at the site have spent the morning celebrating and chanting “mni wichoni” which means “water is life” in Lakota Sioux. And though there is much to celebrate, protesters are continuing to stand their ground despite Monday’s government deadline to leave. Mainly, protesters want to uphold the responsibility of exploring and ensuring alternate routes for pipeline construction.

Feminism, Freedom and ‘The Gilmore Girls’