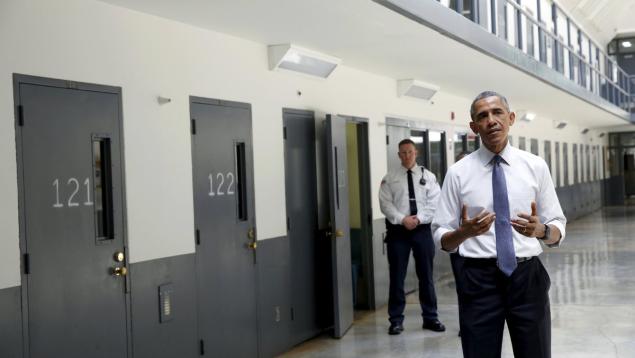 Today, President Obama became the first U.S. president to visit a federal prison while in office. During his tour at a medium-security male prison near Oklahoma City, Obama met with six nonviolent drug offenders. He said the U.S. justice system needs to better distinguish between violent criminals and young people who do “stupid things.” “”When they describe their youth and their childhood, these are young people who made mistakes that aren’t that different than the mistakes I made,” he said. “The difference is, they did not have the kind of support structures, the second chances, the resources that would allow them to survive those mistakes.” During his remaining time in office, Obama hopes to see reduced sentences for nonviolent offenders, restored voting rights to those who have served their sentences, limited use of solitary confinement and more. Prison reform has become a bipartisan issue, with both Democrats and Republicans acknowledging that the American justice system has numerous serious problems. Currently, there are 2.2 million Americans in jails and prisons. And the system disproportionately affects minorities—roughly one in three black males can expect to serve time behind bars at some point in their life.