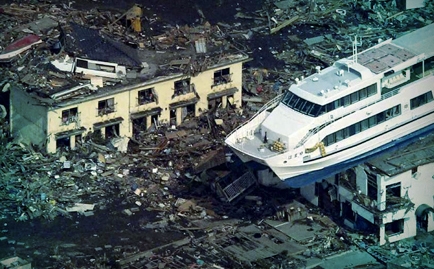 It is too soon for meaning-making with the ongoing crisis in Japan. There will be time later to determine its ramifications for the world economy, for the future of the much-vaunted "nuclear renaissance." But now is not that time. The living are still finding their dead, or seeking and not finding. And workers brave an unimaginably hostile environment as they fight to keep nuclear reactors cool, battling the twin threats of explosion and radioactivity. Several have been hospitalized with radiation poisoning; we don’t yet know how many more will fall in the containment effort.

As every good pastor knows, tragedy’s immediate aftermath does not require sensible words and coherent explanations nearly so much as it requires simple presence, compassion and attention. For those whose hearts are rent by the unfolding revelations of loss in Japan, and torn further by our impotence to act, we have a conjoined responsibility.

First, we should respond when and as we are able with concrete gifts to alleviate suffering. GOOD Magazine has a great, constantly updating list on concrete ways that you can help.

And second, we should sit with our dead, dying and grieving neighbors across the great ocean. This means attending to them in prayer and lifting them to the Lord, the wideness of whose mercy makes a mockery of physical distance.

But even for the strongest in faith, it can feel hard to be present to those unknown to us, who are so far away. How can we manage it?

The natural disaster that struck Japan on Friday would have been catastrophic in any era. But the technological advancement of our age has created the uniquely hybrid catastrophe which developed over the weekend and continues to unfold. It is a product of nature and human knowledge both.

The earth shifts and the waves come; so it has always been. In our day, though, when the earth shifts and the waves come, they disable the electrical systems that run the cooling systems on nuclear reactors. In nuclear power, we have harnessed the degeneration of matter to produce the energy we need to live our lives. This process requires unimaginably tight control. But when we lose control—and there is nothing like the sight of a tsunami to remind us how weak and frail we really are—this loss bears outsized results. Their names stand like memorial stones. Three Mile Island. Chernobyl. And now Fukushima.

It can be soul-deadening to live in an age of such global impact and global responsibility, which transforms human life into statistics. Tens of thousands dead. Hundreds of thousands displaced. Millions without power or water. These numbers are the vocabulary of disaster relief, of bureaucracy. They are necessary. But they do not facilitate grief.

So it seems that one of the purposes of prayer, in such conditions, is its presence to individual lives. The New York Times reported on Syunsuke Doi, 22, who was at work when the tsunami hit his town; after a period of vain hope, he recovered from the morgue the bodies of his wife and childhood sweetheart, Sayaka, and their 2-year-old daughter and 6-month-old son, who were caught in their car while trying to escape. I had been reading the news with genuine concern and sorrow. But in reading of Syunsuke and his lost family, I leaned back in my airplane seat and had to fight to keep composure.

I write this while returning from a weekend at a reunion for my small, geographically disparate family. It was a rare opportunity to visit with my sisters and their husbands; to play with and be an uncle to their young sons, Selim and Joshua. And in watching their families’ daily routines, their mutual love and care, I can hardly take in the investment of care that goes into the raising of a single life—the stringing together of innumerable moments that comprise each person’s being brought into the world.

This is the statistic and number of prayer: one. One life. One squirming, wriggly body that howls to jump in a freezing cold pool; that streaks across a sun-drenched lawn after a soccer ball; that is cajoled into clearing the plate before him; that circulates happily among the adults for goodnight hugs after the evening bath time. One life, which can never be reduced to statistics of pools plunged into and balls chased and dinners eaten and hugs bestowed.

The news cycle will continue to freight the days to come with numbers that defy imagination and thereby beggar compassion. I am certain that Fukushima will be yet another stark exclamation point in our global atomic history; like disasters before it, it will punctuate and pause a process that the nuclear industry would prefer to see flowing in an uninterrupted run-on. None of us can know what this will mean for our energy-hungry planet—especially in the wake of the catastrophes that have plagued the oil and gas industries; especially in light of the ongoing instability in the Middle East. It will probably have no impact on the weapons that are atomic power’s diabolical elder brother, except to elevate the intangible mistrust of anything nuclear.

In all that is to come, it seems to me that our task—in addition to caring for concrete needs of food, water and shelter—is to maintain, in prayer, the possibility of grief. Statistics homogenize individuals into a lump sum, hiding them behind stacks of zeros. Our job is to unearth, in prayer, the people who make up such mind-boggling numbers. They are all simply one plus one plus one. Only in this will we be able to maintain the central humanity of all tragedy, without which we are lost.

Tyler Wigg-Stevenson (@TylerWS) is the founding director of the Two Futures Project (@2FP).