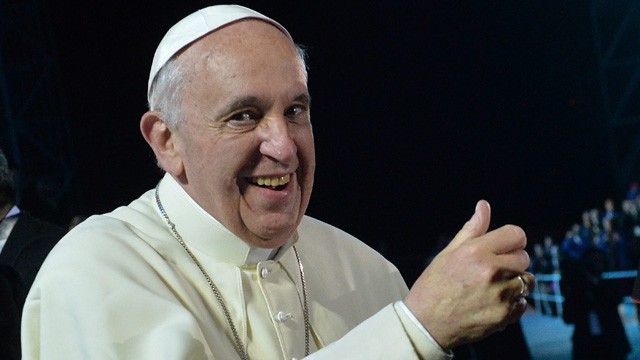 Monday morning, Pope Francis invited the world’s cosmetologists, hairdressers and beauticians to the Vatican. He encouraged them to practice their professions in a Christian manner, but warned them against gossip in the workplace. (h/t Yahoo News)

“Practice your profession in a Christian style, treating customers with kindness and courtesy, and always offering them a good word and encouragement,” Francis told the assembled hair stylists, adding they should “[avoid] giving in to the temptation of chatter that easily creeps into your work environment.”

Chatter is certainly commonplace at salons and barbershops. Cutting hair is an intimate act, and who can blame customers for spilling a little tea once they have a seat? But if the Pope’s words ought to be heeded—and hey, the guy knows a thing or two about following Jesus—maybe we should keep our hair-cutting talk to news of the day and favorite TV shows.

The Pope’s message to the beauticians was amusing in its customization. He told the assembled to be guided by their patron saint, Peruvian Martino de Porres, a 16th-century barber-surgeon from Lima. De Porres’ miracles include levitation, being in two places at once, healing and even some instances of communicating with animals. The guy was pretty much a Disney character.

The Strange Appeal and Serious Danger of Saying Thanos Was Right