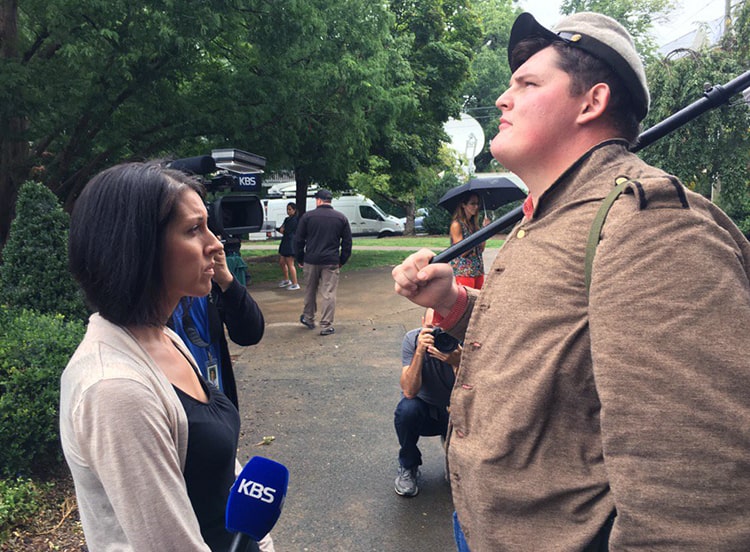 For most Americans, watching the events from earlier this month has been heartbreaking.

There is a certain level of disbelief that washes over some of us as we see the dark shadows we have long feared materialize. We have been told repeatedly that there is nothing out there to fear but fear itself; implying that nationalists, supremacists and neo-Nazis are just harmless shadows of their historic defeated namesakes. But every so often a revealing curtain is pulled back, and we see that there is a violent and deadly form in the void of our fears.

Charlottesville was but another curtain call in a line of incidents which stretch from the Emanuel AME Church Massacre in Charlestown, South Carolina, and the Oklahoma City bombing, to the battle for desegregation and the church bombings in 1950s Birmingham.

C.S. Lewis wrote that while he favored democracy, placing faith in political ideologies has its limits. “Democracy is medicine,” he wrote. “It’s not food.” What Lewis was hinting at is that there is something more ultimate than a political ideology. While we need politics in the same way that we need medicine, we can not survive on politics alone.

The human heart hungers for something more substantial, it was created to feed on something more permanent than politics. Lewis continued: “Ultimate reality is not democracy because you were made to be ruled and if you don’t acknowledge Jesus as King, you will serve somebody … Human nature will be served. If it doesn’t get food it will bow to poison.”

What is most disappointing about President Trump’s response to the turmoil in Charlottesville is not its timing but its substance. Rather than providing conflicted Americans with a taste of hope, he seems content to dole out rhetorical poison.

There is a hunger in America today, a hunger and a desire for leadership. Throughout our history, in times of peril and turmoil, our greatest leaders have guided us, not by pointing us to the remedies of political ideologies, but by appealing to something greater. Presidents have the unique position and pulpit to lift our hearts and inspire our souls.

They can stand above the fray and bid us to cast our gaze beyond the horizon to ultimate truths that supersede our political distinctions. This is what our founding fathers did with their words about a creator of inalienable rights and the equality of men; what Lincoln did during the Civil War, what FDR did in the fight against tyranny.

I grew up in the South. I saw and heard firsthand the lingering effects of historic racism and the not-so-subtle warnings of its continued presence in American culture. I watched the events in Charlottesville with great sadness. I was disgusted by the images of rebel flags and torches in the night, symbols that are now indelible parts of Southern heritage.

My heart broke for the families who now must cope with the grief of loss. My mind raced and raged at the sights of those who would claim to fight for “American values” in ways that I believe to be supremely un-American. But all the while, when I looked at the pitiable faces, dimly lit by tiki torches, I felt empathy for them.

To be clear, I do not sympathize, empathize or approve of the vile and disgusting views advocated by the nationalist thugs in bicycle helmets wielding cardboard shields. What I see though, are the faces of those who have exchanged the food for which they were created, for the drugs of national identity and racial superiority. These are starving souls bowing to poison, an epidemic much older, more expansive and with greater costs than the nation’s opioid epidemic.

It would be easy for me to rise up in righteous indignation and spout platitudes from atop some high-rise near my Manhattan apartment, to suggest that the best defense against democracies attackers is simply more democracy. But 220 years of that debate has yet to heal the wounds or satisfy the souls of those wanting more.

Those of us who long for freedom must first remember from whence it comes. Freedom, ultimately, is not the right to be left alone, nor the right to determine our future or the future of others; freedom is found when we are willing to be submissive to an authority outside of ourselves.

That rule and governing authority is not symbolized by a iron cross on a shield, but a wooden cross on a hillside. Jesus did not hide behind His cross, shouting and commanding that we follow Him, He hung on the front of His Cross displaying the lengths He would go to welcome everyone, regardless of race or ethnicity, into His Kingdom.

My greatest fear is not that the supremacists will succeed, as I am quite confident they will not. My greatest fear is that we would settle, as a nation, for the medicine rather than the meal, and overdose on the poison of politics. My hope is that we will recognize that all of us, on either side of the protest line, were created for something more and that our leaders would cease their polemics and finally set the table.

At Long Last, Sean Spicer Got to Meet Pope Francis

Yet Another Reporter Stopped Broadcasting to Rescue Hurricane Victims