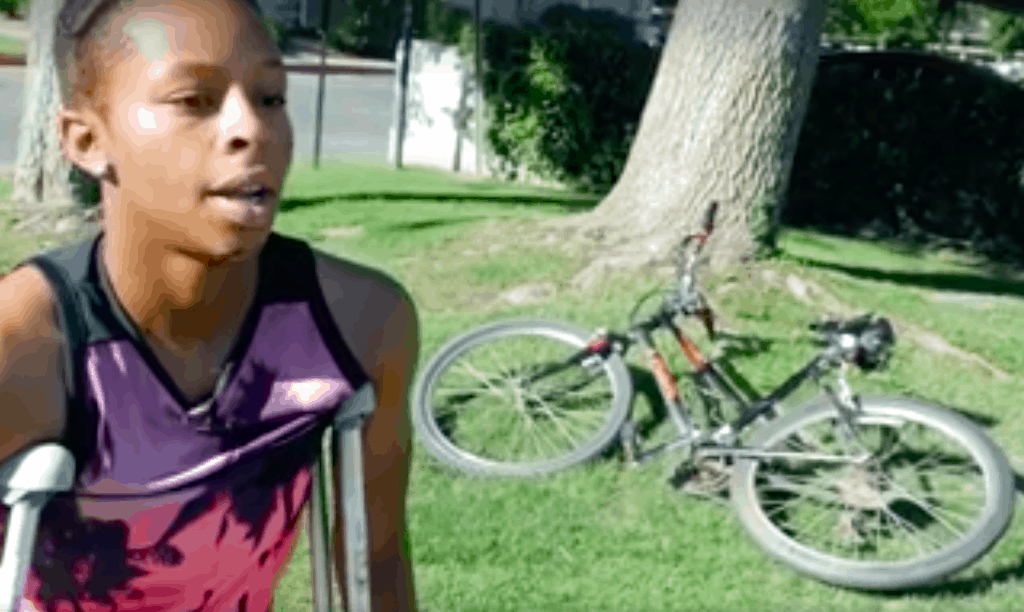 Nineteen-year-old Tatyana Hargrove was riding a friend’s bike around Bakersfield, California, looking for a gift for her dad on Father’s Day when she noticed three police cars near her, and an officer who’d already drawn his gun.

Those police were apparently looking for a 170 lb., 5-foot-10 black male suspect who was between 25 and 30 years old. That man had allegedly been threatening people with a machete nearby. “[Hargrove] appeared to be a male and matched the description of the suspect that had brandished the machete and was also within the same complex the suspect had fled to,” Christopher Moore, the arresting officer, wrote in his report according to the Washington Post.

Of course, Hargrove does not match the description of the suspect in any respect other than the color of her skin. She is 5-foot-2 and weighs about 115 pounds, according to a video testimony of the account.

Nevertheless, according to the video, a police officer demanded to see Hargrove’s backpack. She asked the officer if he had a warrant, who responded by gesturing to his police K-9. “I then got scared and then I was like, here, take the backpack, just take the backpack,” Hargrove said.

Then, according to Hargrove, a police officer grabbed her by the wrist, punched her and then threw her on the ground. Hargrove says the K-9 then started to bite her leg, while another officer put a knee on her back and a knee on her head.

That account seems to match up with both the police and hospital reports of the incident. Hargrove was taken to a hospital for treatment of her injuries including “abrasions on her face and scrapes and punctures from the police K-9’s ‘engagement on her right thigh,'” Moore, the arresting officer, wrote in his report.

After treatment for her injuries, Hargrove was booked for resisting or delaying an officer and aggravated assault on an officer. According to the NAACP, she was in jail for 16 hours before her parents bailed her out.

In Moore’s report, he says that Hargrove “spun into” one of the officers, knocking him back. “At this time I was forced to quickly consider the following; [Hargrove] matched the description of the suspect that had brandished a machete, her backpack was within her arm’s reach and the main compartment was unzipped allowing her immediate access to the machete,” Moore wrote.

Moore also wrote that when Hargrove gave her name as Tatyana, he didn’t believe her because he still thought she was a boy.

“Why should my daughter be charged with a crime? All she did was stop to drink some water because it was 100-something degrees. That’s ridiculous,” says Hargrove’s father, in the video. “She was coming home to celebrate Father’s Day with me. It’s not right. It’s not right.”

How Churches Can Make Perfection an Idol