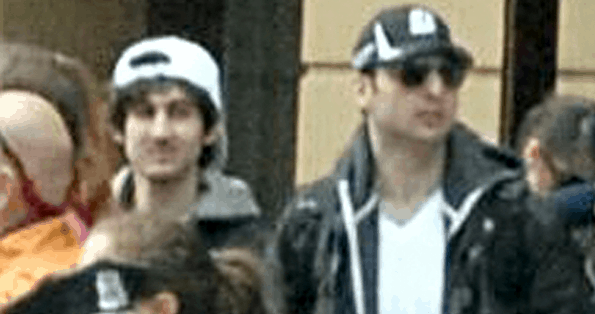 There have been some major developments in the search for the suspects in the Boston Marathon Bombings over night. Like many elements of this case, there have been some conflicting details reported in what took place, but according to several outlets, here’s what happened: Early in the evening, the two suspects robbed a 7-11 convenient store. From there, they shot and killed an MIT police officer, and carjacked another vehicle, holding the driver hostage. They released him after about a half hour unharmed. A massive gunfight with police ensued when officers responded to the carjacking, as the suspects threw explosives at the police. During the chase Suspect 1 (the one in the black hat) was killed, and Suspect 2 (white hat) escaped.

The city of Boston is currently under lockdown as police conduct a massive manhunt. It’s being reported that the two are brothers from an area near Chechnya and have lived in the United States for more than a year. The name of the suspect still at large is Dzhokhar A. Tsarnaev—he is believed to be 19 years old. His brother, Tamerlan was 26, and police say he had an explosive device strapped to his chest when he was killed in the firefight …

Update 1: Who Is Dzhokhar A. Tsarnaev? The Atlantic has compiled some additional information about the 19-year-old suspect through analysis of social media postings and information about his education in the United States. The two men’s uncle say he is shocked by the unfolding situation. According to this story, Tamerlan (the brother who was killed last night), was a boxer who could have been selected for the U.S. Olympic team if he had won an upcoming Golden Glove competition he (said) he was planning on competing in.

Update 3: They got him. Shortly after the lockdown status was lifted, a citizen noticed that the tarp covering a boat parked in his yard had been tampered with. An injured Dzhokhar Tsarnaev was hiding inside. After a tense standoff with police, he was arrested and taken into custody.