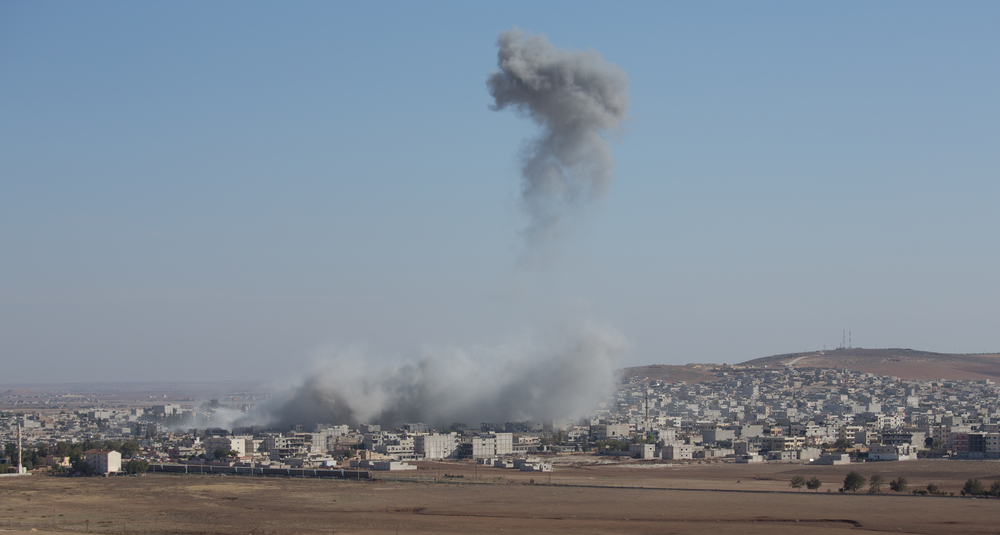 Breaking: Several People Were Shot at an Elementary School in California

The United States Navy fired 59 tomahawk missiles into Syria last week in order to destroy the airbase where Bashar al-Assad launched a deadly chemical attack earlier in the week. This is the most direct U.S. involvement in the war zone so far, and it comes after years convoluted internal and external developments regarding Syria.

While this action is likely to be viewed positively here in the U.S. and by many around the world, there are two principles that should shape Christians’ reactions to this—or any—military action.

First, redemptive violence is a myth.

[lborder]The Myth of Redemptive Violence is the story of the victory of order over chaos by means of violence. It is the ideology of conquest, the original religion of the status quo. The gods

In short, the Myth of Redemptive Violence is the story of the victory of order over chaos by means of violence. It is the ideology of conquest, the original religion of the status quo. The gods favour those who conquer. Conversely, whoever conquers must have the favour of the gods.

This way of thinking is a trap. It wrongly conflates justice with retribution. In the end, this perspective leads to cycles of violence (which is often thought of only in terms of domestic violence).

Second, all violence is escalatory.

This is why leading contagious disease experts are now treating outbreaks in violence like an infectious epidemic. Gary Slutkin, a global expert in this field, reports that the greatest predictor of future violence is a preceding act of violence.

Both of these principles are rooted in the Sermon on the Mount.

In Matthew 5:9, Jesus says, “Blessed are the peacemakers for the shall be called sons of God.” He doesn’t leave it there though. In 5:39-42, he dispels the notion of returning violence with violence and, in 5:43-47, he explains the call of the peacemaker:

You have heard that it was said, ‘Love your neighbor and hate your enemy.’ But I tell you, love your enemies and pray for those who persecute you, that you may be children of your Father in heaven. He causes his sun to rise on the evil and the good, and sends rain on the righteous and the unrighteous. If you love those who love you, what reward will you get? Are not even the tax collectors doing that? And if you greet only your own people, what are you doing more than others? Do not even pagans do that?

This message of peacemaking directly counters the established conflict resolution paradigm of Jesus’ time—as well as in ours. Importantly, Jesus goes beyond deconstructing their (and our) existing understanding. Throughout the Sermon on the Mount, He builds an entirely new framework from which we can approach the world. This new approach defines, in real terms, the “Kingdom of Heaven.”

The kingdom points us not to the place of God but to God’s ruling activities. It is not a kingdom in heaven, but from heaven—one that thrives here and now. The kingdom appears whenever women and men submit their lives to God’s will.

This gives us an important understanding of what Jesus meant when he instructed the disciples to pray (in Matthew 6), “your kingdom come, your will be done, on earth as it is in heaven.” Or, as N.T. Wright says, in his book Surprised by Hope, “Jesus’s resurrection is the beginning of God’s new project not to snatch people away from earth to heaven but to colonize earth with the life of heaven. That, after all, is what the Lord’s Prayer is about.”

As we approach Easter, it’s critical that we embrace these concepts, not just in some erudite theological sense, but in real and practical ways: Jesus’ life and death on the cross means more than our personal salvation. It inaugurated God’s Kingdom on earth.

When the apostle Paul writes in 2 Corinthians 5, that we—as the people of God’s new Kingdom—are to be “ambassadors” for the work of reconciliation it means that we’re also to actively live under the new rules. He writes:

Therefore, if anyone is in Christ, the new creation has come: The old has gone, the new is here! All this is from God, who reconciled us to himself through Christ and gave us the ministry of reconciliation: that God was reconciling the world to himself in Christ, not counting people’s sins against them. And he has committed to us the message of reconciliation. We are therefore Christ’s ambassadors, as though God were making his appeal through us. We implore you on Christ’s behalf: Be reconciled to God. God made him who had no sin to be sin for us, so that in him we might become the righteousness of God.

When it comes to violent military action we need to live under the new rules of the Kingdom of Heaven. That isn’t to categorize the recent retaliatory airstrikes as immoral or wrong, but it is to say: That type of response is based in an outdated paradigm; in the old rules.

Donald Norman writes about faith and politics. He’s an alumnus of Fresno Pacific University and serves as associate director of Alongside Ministries International. Opinions reflect only his own.