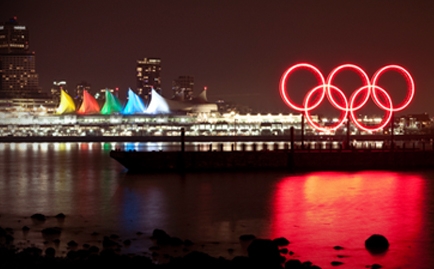 The Olympics are usually a time when countries compete in friendly bouts of athletic tests and citizens cheer them on. Even when countries might bicker politically (or militarily), the Olympics is a place for peaceful coexistence through sport. The 2010 Winter Games (commencing tonight in Vancouver, British Columbia, Canada) should be no different.

But recently, groups have begun to highlight a dark side to the Olympic Games. According to a report from The Future Project, an organization in Canada dedicated to the eradication of human sex trafficking (the practice of coercing people against their will into the sex trade), the possibility of sex trafficking rises exponentially at international sporting events like the Olympics. The report says the number of human trafficking victims almost doubled in Greece the year of the 2004 Athens Games, and still hasn’t returned to pre-2004 levels.

The Future Project’s report also notes that international sporting events are particularly insidious in the sex trade industry, as it makes it easier to bring visitors into the country who may be unwilling victims of the sex trade. This coincides with an increase in demand for prostitution and “other forms of sexual exploitation” by attendees. Though a disturbing truth, it is inescapable in a year that will see both the Winter Olympics and the World Cup. (Already, a couple in Wales was arrested for running an expansive prostitution ring of young Nigerian girls, an operation they intended to move to South Africa in time for the World Cup this summer.) Vancouver holds a reputation as a city attractive to traffickers; a 2007 U. S. State Department report said there were many victims, particularly from South Korea, who are sent through Vancouver before being trafficked into the United States.

“When you add several hundred thousand extra people into a market place, some who are ‘out of town,’ without common decency boundaries and behaving outside of their norms, then the demand for illicit sex will increase,” says Brian Venables, Divisional Secretary for Public Relations and Development of the Salvation Army’s British Colombia Division. “Historical data indicates that when the world stage comes to a community the crimes against women and sex crimes increase .”

In 2008, the Salvation Army launched a campaign called “The Truth Isn’t Sexy” to combat human sex trafficking in that area, and have now intensified their efforts with the arrival of the Winter Games. It relies heavily on the use of startling ads in magazines, billboards and TV and radio spots “to show the face of human sex trafficking and the innocence lost.” From there, people are directed to their website, containing a wealth of information to educate the public about the severity of this crisis. They also host events and partner with other various agencies to shine a spotlight on the dark world of human sex trafficking. Their research finds that roughly 800 are enslaved in Canada’s sex industry at any given time, the majority of which are young women between 12 and 25 years of age. An estimated total of 8,000 females become victims of this inhumane system every year in Canada alone, a number that is expected to grow in 2010. “The pendulum is swinging and there are more and more domestically trafficked girls and women, no longer just foreign individuals. If we raise the awareness, more caring individuals will be mindful of what to look for and how to report it,” explains Venables.

A group called Resist Exploitation, Embrace Dignity (REED) is also sounding the alarm in Vancouver with a campaign dubbed “Buying Sex Is Not a Sport.” REED has set up panels and forums around Vancouver in the lead-up to the 2010 Winter Olympics. The group seeks to inform people of the increased demand for sex during the Olympics, and ways they can get involved in eradicating the trade. Their site even posted a list of “10 Things You Can Do Today” to promote dignity and protest destructive sexual paradigms, including simple tasks such as, “Challenge those who make sexist jokes.” The campaign stresses that in order for human trafficking to cease, the demand for paid sex must cease as well. Buttons, stickers and shirts bearing the “Buying Sex Is Not a Sport” logo are also being sold to prompt further conversation about the issue.

REED makes a valid point that real change is going to come not only from restoring the victims of sex trafficking but in challenging the mindsets and environments that condone or promote it. Those buying and selling, though the guilty party, are going to need just as much rehabilitation. Venables and the Salvation Army team agree. “Now we are addressing the demand side of the equation and have directed our creativity to demonstrate the pain and shame, not [only] of the victims but the users of the issue,” Venables affirmed.

It remains to be seen what kind of impact REED, Salvation Army and other anti-sex trafficking initiatives will have in Vancouver during these next few weeks. But of all of the noble efforts being displayed at these games, this is one worth rooting for. “We want to rescue as many as we can to hopefully make it less profitable and reduce human trafficking as a practice in Canada and globally,” concludes Venables. “We want to restore the sparkle of hope in the eyes of these young people and help them become survivors instead of victims.”

This article was expanded from a Slice in the Jan/Feb 2010 issue of RELEVANT magazine. You can subscribe here.