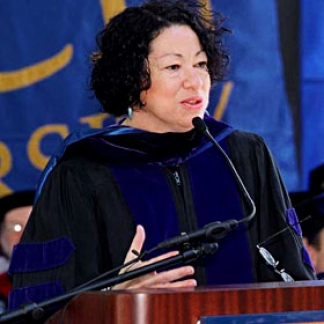 Souter, who was appointed by former President George H.W. Bush, was seen as a disappointment by many conservatives. Expected to be a traditionalist, Souter was more of a middle-of-the-road justice with liberal leanings. Especially toward the end of his career, Souter began to align more with liberal justices. Because of Souter’s record, Obama’s appointment may not substantially change the ideological makeup of the court, but it’s nevertheless important to assess President Obama’s nominee for Souter’s seat.

Yesterday morning, the president announced the nomination of Judge Sonia Sotomayor. If confirmed, Sotomayor would bring further diversity to the Court. She would be only the third female and the first Hispanic to become a Supreme Court justice. The 54-year-old Sotomayor grew up in a South Bronx housing project. She says she knew she wanted to be a judge after watching courtroom drama Perry Mason as a 10-year-old. She was appointed by President George H.W. Bush, and first gained national attention for her 1995 ruling that settled the labor dispute in Major League baseball, and has most recently worked as a federal appeals judge.

Already, her appointment has drawn concerns from conservative and religious groups. During her 17 years on the bench, Sotomayor has never decided a case that directly regulates abortion. However, many conservative groups see her as an activist judge, who believes the role of the Court is to set policy. Wendy E. Long, the counsel for conservative group Judicial Confirmation Network, was disappointed by Sotomayor’s nomination, saying, “Judge Sotomayor is a liberal judicial activist of the first order who thinks her own personal political agenda is more important that the law as written. She thinks that judges should dictate policy, and that one’s sex, race and ethnicity ought to affect the decisions one renders from the bench.”

This activist bent, conservatives fear, may affect future Constitutional rulings on abortion. A judge who feels that it is the Court’s role to set policy rather than strictly interpret the Constitution could effectively subvert the process of representative democracy. A new poll has found that most Americans care deeply about the issue of abortion, and are concerned about the kind of justice President Obama nominates. The poll, conducted by Americans United for Life, found that 52 percent of respondents felt that states, rather than the federal government, should regulate abortion, while 82 percent opposed a justice who would rule in favor of partial birth abortion.

Though Sotomayor’s record may explicitly illuminate her views on abortion, past rulings have indicated her support of religious freedom. As a district judge, she rejected a suburban law banning the display of a nine-foot-high menorah in a public park, and overturned a state prison rule that kept members of a religious sect from wearing colored beads to ward off evil spirits. As unique as these cases may have been, they do set a precedent for First Amendment protection and a respect for religious freedom in the public sphere.

Moreover, her tenure as an appeals court judge does show a tendency to separate emotion from her rulings. In a 2000 decision, an appellate court ruled that the 1996 crash of TWA Flight 800—which occurred eight miles off the coast of Long Island—had happened within U.S. territorial waters and thus the victims’ families could sue for damages that they would have been unable to seek had the crash happened in international waters. In her dissenting opinion, Sotomayor wrote that the court had ignored earlier rulings that limited the range to three nautical miles in “an understandable desire to provide the relatives and estate representatives … a more generous recovery.” She argued that an unemotional examination of the law would have found that there was no legal precedent for the court’s ruling. Decisions like this may show Sotomayor as less of an activist judge and more of an originalist.

Throwing another wrinkle into Sotomayor’s nomination is the fact that she is Catholic. An ardently pro-life denomination, the Catholic Church has gone so far as to refuse communion to politicians who support abortion rights. If Sotomayor is confirmed, she would join fellow Catholics Antonin Scalia, Samuel Alito, Anthony Kennedy, Clarence Thomas and John Roberts. Though she does appear to be more liberal-minded, will her Catholic upbringing affect her ruling on cases dealing with abortion or capital punishment?

These factors aside, be sure that Sonia Sotomayor will undergo rigorous scrutiny. Though Republicans have stated they would prefer to avoid a filibuster to block potential nominees, they have not ruled the action out. Within the weeks and months to come, Sotomayor’s record will be rigorously examined. Though many pundits say a liberal-leaning judge would be a zero-sum-gain as Souter’s replacement, the Obama administration may indeed have the opportunity to greatly affect the atmosphere of the Supreme Court.

Where Am I Wearing Wednesday: Shoes