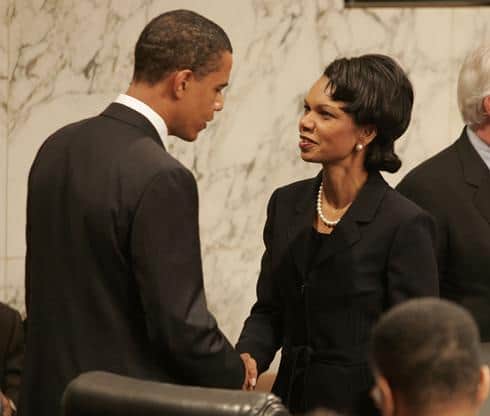 This past weekend, President Barack Obama delivered the commencement address at Rutgers University. In his talk, he called back to the school’s commencement two years earlier.

In 2014, the university invited former secretary of state—and former girlfriend of Jack Donaghy—Condoleezza Rice to deliver the address. But students revolted, and eventually pressured her to back out. Apparently, students were protesting Rice’s role in the Bush administration’s decision to invade Iraq.

But Obama told the Rutgers community that pushing her out was “misguided.” Here’s what he said:

I don’t think it’s a secret that I disagree with many of the policies of Dr. Rice and the previous administration. But the notion that this community or this country would be better served by not hearing a former secretary of state or not hearing what she had to say — I believe that’s misguided. I don’t think that’s how democracy works best, when we’re not even willing to listen to each other.
…

If you disagree with somebody, bring them in and ask them tough questions. Hold their feet to the fire, make them defend their positions. … Don’t be scared to take somebody on. Don’t feel like you got to shut your ears off because you’re too fragile and somebody might offend your sensibilities. Go at them if they’re not making any sense.

A Business Insider report from Obama’s talk notes that, back in 2014, Rice wasn’t the only person to back out of commencement addresses for similar reasons. And already this year another former secretary of state (Madeleine Albright) received a similar treatment.

Obama’s call for civil discourse—not civil silencing—is reminiscent of world-famous author J.K. Rowling’s recent defense of Donald Trump, which we told you about yesterday. Of course, neither Obama nor Rowling are defending the views of others, but rather their rights to have those views.

The Rise of Steph Curry Is No Fluke