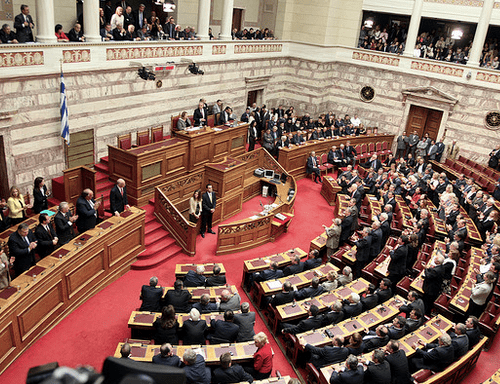 Pres. Obama When Asked about Cosby: Country ‘Should Have No Tolerance for Rape’

Violent demonstrations broke out in Athens last night, as thousands gathered to protest a bill that would implement new, strict austerity measures as the terms of a third economic bail out. According to the AP, more than a dozen were arrested and 37 detained when angry crowds burned cars, hurled rocks and attacked police officers. Greece, right?

A bill did end up passing, though it proved divisive, even in the Greek Prime Minister Alexis Tsipras’ own party. The measures put new sales taxes in place and reform pension policies. Greece has become dangerously close to running out of money and defaulting on international loans. As part of the new deal, Greece will receive 85 billion euros over the next several years. In a statement to lawmakers before the vote, Prime Minister Tsipras said “We had a very specific choice: A deal we largely disagreed with, or a chaotic default.”

Pres. Obama When Asked about Cosby: Country ‘Should Have No Tolerance for Rape’