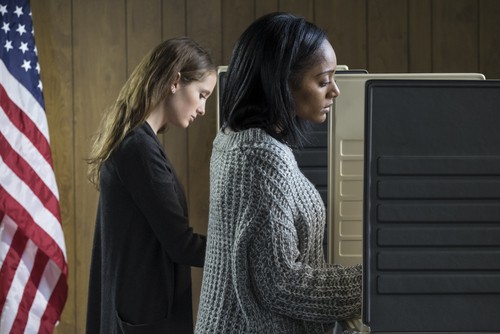 Nerves are getting tense in the lead up to Georgia’s hotly contested midterms, where current Republican secretary of state Brian Kemp is neck-and-neck with Democrat Stacey Abrams. If she wins, Abrams would be the United States’ very first black woman governor.

The process is allegedly put in place to combat voter fraud and at first blush, doesn’t seem too outlandish. But critics say that is disproportionately affects black and Latino voters, and the situation in Georgia would seem to be evidence of that. The state is currently holding up the registrations of 53,000 voters, 73 percent of whom are black.

This is all further complicated by the fact that, as secretary of state, these voters are technically Kemp’s responsibility. For his part, Kemp is saying that the 53,000 delayed voters will be able to vote by November, and accused his opponent of stoking manufactured outrage.

The 53,000 Georgians on our pending list can vote this fall. Abrams is afraid to run on her extreme record so she manufactures outrage off a “problem” she created. She uses fear to fundraise and liberal billionaires continue to bankroll her corrupt enterprise. #gapol #gagop pic.twitter.com/UQpdurabG5

According to reporting from the Brennan Center, Kemp has purged about 1.5 million voters between 2012 and 2016, just one part of a huge nationwide increase in purging voter roles. “It is our belief that there is an over-representation of African American, Latino and lower and working-class individuals,” Derrick Johnson, the president and CEO of the NAACP, told ABC News at the time. “It is unfortunate that this nation has refused to honor the sacred right to vote and proactively protect that right for all citizens.”