Thanksgiving is just around the corner in the U.S. which is a little hard to believe since the last holiday season feels like a hundred years ago. Pandemic protocol means that we’ll all probably have a slightly different Thanksgiving situation this year, with a lot of us probably planning on joining our friends and loved ones over Zoom. That’s a little unfortunate but one thing COVID-19 can’t take from us is the Thanksgiving dinner itself. The turkey is a given, of course, but the real star of the show is the sides. Mashed potatoes. Green bean casserole. Mac and cheese. Sweet potatoes. Stuffing. Which side is best?

According to Zippia, that probably depends on where you live. They broke down the favorite side of all 50 states plus D.C. and discovered that while the U.S. may be in a divisive time politically, we are united in our love of carbs, except for Maine, where the favorite side is “salad,” which is absolutely nuts. 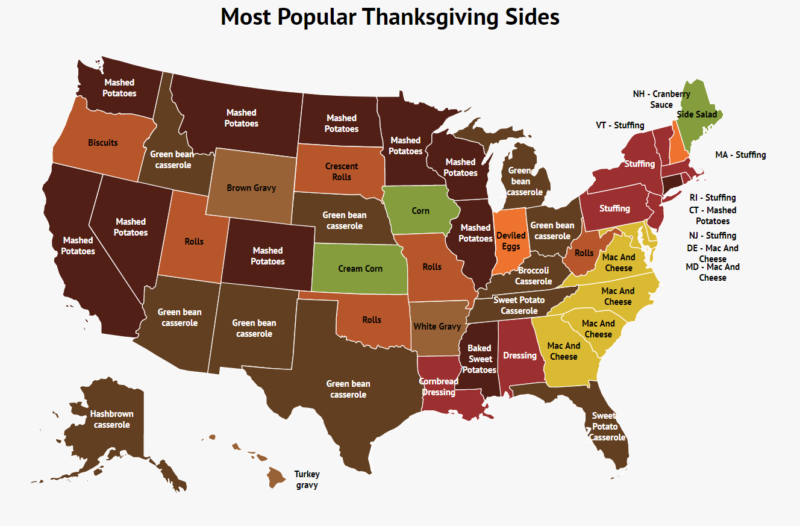 The United States is boarded by a strong green bean casserole belt along the South, a mac and cheese quadrant along the East and a striking mashed potato wall that begins in Illinois and stretches nearly unbroken all the way across the North and down along the West. The heartland is dotted with green bean casserole dishes across the Great Plains and Midwest while lots of sweet potato variations pop up in the Southeast. And then there’s Maine again. Let’s circle back there. Not sure what’s going on there but they’re part of our nation and we must hear them out with civility as we attempt to understand their strange habits.

Surprising few, Zippia found that mashed potatoes are the all around favorite in the U.S. with mac and cheese right behind. Cranberry sauce was the favorite in just New Hampshire, while Alabama chose “dressing” — known to most of the country as “stuffing.” Colorado just went with brown gravy, which is a huge flex.

Zippia determined this data just by simply checking up on Google Trends to see which side items was Googled the most in each state on Thanksgiving Day, so it should be fairly accurate, depending on how many households have their side item recipes memorized or written down in an old-fashioned cookbook in each state.

That settles that. Now onto the best Thanksgiving pie.