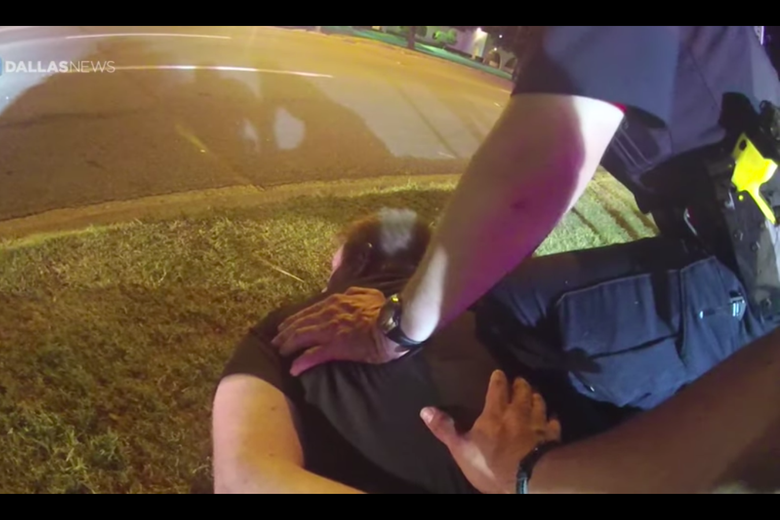 The 2016 footage is a major break in a case local news outlets have been investigating for years. Timpa himself had been the one who called 911. The 32-year-old told the dispatcher that he had schizophrenia and depression, was off his medication and feeling afraid, and police were later unable to explain how an unarmed man who had called for help ended up dead. A police incident report said Timpa had been aggressive and combative, and that officers had only subdued him so he wouldn’t hurt himself. But the footage only shows Timpa writhing around in the grass, struggling to breathe. He never threatens the police.

You can watch the very disturbing video here.

As Dallas Morning News notes, the footage also shows police “mocking Timpa as he struggled to live. Shortly after one officer ridicules Timpa’s repeated cries for help, an officer notes that he appears to be ‘out cold.’ They joke that he’s merely asleep and try to wake him: ‘It’s time for school. Wake up!’ One officer mimics a teen saying: ‘I don’t want to go to school! Five more minutes, Mom!'”

It’s unclear why the officers didn’t immediately try to detect a pulse or a heartbeat after Timpa became unresponsive. After paramedics arrived and began loading Timpa’s lifeless body onto a gurney, the officers become concerned, with one asking “He didn’t just die down there, did he?”

An autopsy found traces of illegal drugs in Timpa’s system and determined he died from “the toxic effects of cocaine and the stress associated with physical restraint.”

In 2017, the three officers—Kevin Mansell, Danny Vasquez and Dustin Dillard—were indicted by a grand jury on charges of misdemeanor deadly conduct. The indictment said the officers “engaged in reckless conduct that placed Timpa in imminent danger of serious bodily injury.” However, Dallas County District Attorney John Creuzot dismissed the charges and all three men returned to active duty.

The city of Dallas fought to prevent the footage from being made public, saying it was part of an ongoing criminal investigation.

The Ethical Society of Police, an association of police officers in St. Louis that advocates for reforms, took to Twitter to condemn the officers, saying their actions that evening defied “common sense” and that “their indifference for the man is angering.”

All the Times Religion Came Up in Tuesday’s Democratic Debates