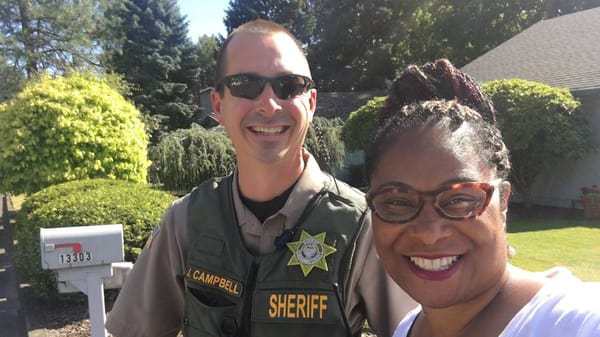 In HBO’s ‘Sharp Objects,’ Your Past Becomes the Present

In one of the more ironic cases of people calling the police on black people for existing while black, a neighbor called the police on their own state representative.

On Tuesday, Rep. Janelle Bynum was canvassing for re-election in an Oregon neighborhood she represents—knocking on doors and talking with people for two hours, according to the Oregonian/OregonLive.

According to the report, she was nearly done with her list of 30 homes to visit when a Clackamas County officer approached her.

She looked over at the deputy in his patrol car and thought, “I don’t believe this.” He asked if she was selling something. She introduced herself as a state legislator and said that she was out canvassing and that she guessed someone called him.

The deputy said someone called and reported Bynum appearing to spend a long time at houses in the area and appearing to be casing the neighborhood while on her phone.

The officer told Bynum the call was made by a woman, but she doesn’t know the woman’s race or which house she lived in.

“It was just bizarre,” Bynum told The Oregonian/OregonLive. “It boils down to people not knowing their neighbors and people having a sense of fear in their neighborhoods, which is kind of my job to help eradicate. But at the end of the day, it’s important for people to feel like they can talk to each other to help minimize misunderstandings.”

The officer let Bynum speak to the caller and she apparently apologized and said she was only calling the police to keep her neighborhood safe.

Bynum told reporters she wished the caller would’ve tried speaking with her first, but she understood her being concerned for her neighborhood.

“We all know that we’re not in a society that is perfect, and we have wounds that still need to heal, but at the end of the day, I want to know my kids can walk down the street without fear,” she said.

She plans to continue canvassing.

“I hope everyone gets a good look at my face, because I’m coming to your door,” she said.