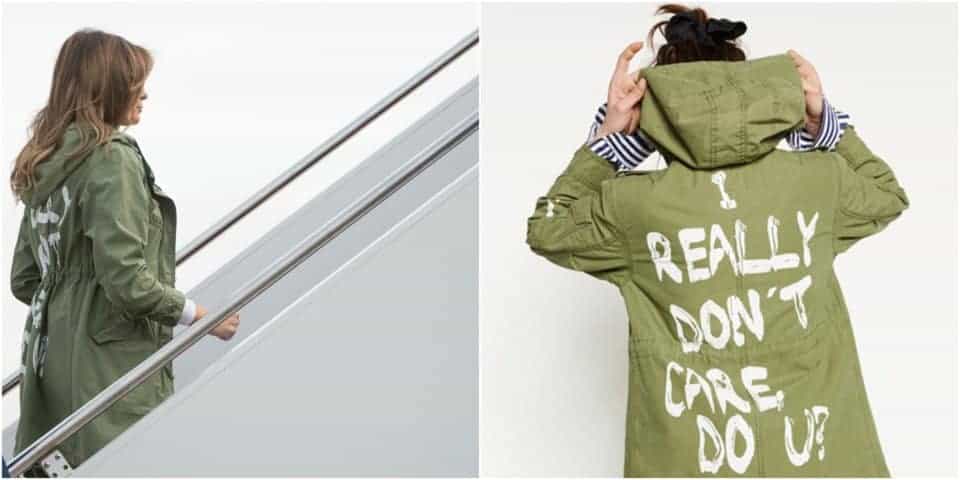 The past few days have been some of the most chaotic of President Donald Trump’s administration, as the implementation of his zero-tolerance border policy which resulted in detaining children in cages without their parents has been met with protest and outrage by an unlikely coalition of religious leaders, Republican and Democratic politicians, pundits, foreign heads of state, J.K. Rowling and, well, just about everyone.

Trump relented under pressure on Wednesday, signing an executive order that would halt family separation in favor of detaining families together and as part of the damage control operation, sent first lady Melania Trump to survey the Texas detention centers at which the children were being held. The purpose of her visit was “to take part in briefings and tours at a nonprofit social services center for children who have entered the United States illegally and a customs and border patrol processing center.”

That’s a pretty by-the-book political effort to regain control of a narrative, but efforts were somewhat derailed by Mrs. Trump’s jacket, the back of which was emblazoned in giant letters: “I REALLY DON’T CARE, DO U?”

Daily Mail reports that Melania Trump boarded her plane to Texas wearing a jacket that said on the back, “I really don’t care, do u?”https://t.co/SeNGeux5jB pic.twitter.com/owHqTAyPdO

The first lady’s spokeswoman responded to press questions by saying: “It’s just a jacket. There’s no message. I hope we can talk about her important visit with children today rather than her wardrobe choice.”

On the one hand, the first lady has a point. There are far more important things going on in the country than Melania Trump’s jacket. First ladies have a long history of being critiqued and hyper-analyzed for their fashion decisions in ways that detracts from their accomplishments and activism. Michelle Obama was criticized for wearing pricey shoes to a food bank. Before her, Laura Bush took heat for what some perceived as an unacceptable ballgown.

But on the other hand … really? Taking Mrs. Trump at her word, that there was no sinister intention behind the jacket (a $39 number from Zara, if the internet sleuths are correct), did nobody stop to consider the optics here? In the midst of an administration fending off myriad accusations of calloused indifference toward the plight of refugees, was there not one person who thought to maybe this jacket smacked a bit of “Let them eat cake” except far more on the nose?

In any case, the question of whether or not “u care” isn’t a bad one. Experts estimate that some 2,500 children remain detained despite the president’s executive order, and there is no clear plan for reuniting them with their parents, many of whom have already been deported. RAICES has promised to use their huge surge in donations over the last few days to help detained immigrant children find their parents. You can contribute, and learn more, here.

How the Bible Commands Us to Welcome the Stranger