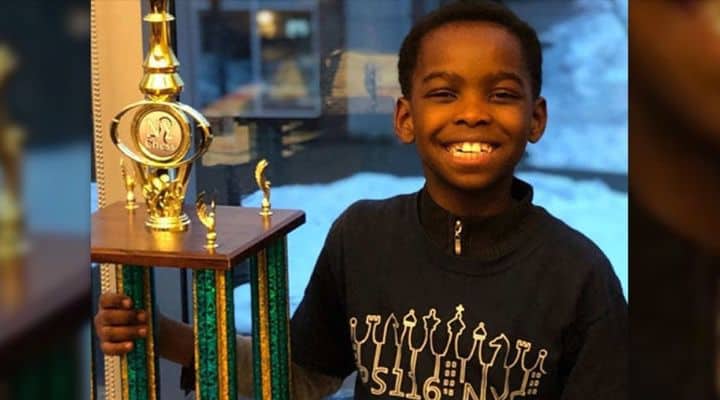 Tanitoluwa Adewumi is an 8-year-old Nigerian refugee who lived in a Manhattan homeless shelter with his family after they fled Boko Haram’s mass persecution of Christians, like them. A New York City pastor helped Tani, as he’s known, and his family find a homeless shelter and Tani started school — and learned how to play chess from a part-time instructor. Tani enjoyed chess and wanted to join the chess club, but his family couldn’t afford the fees.

Fortunately, the school opted to waive them and that’s where it all started.

One year later, and Tani was crowned the national chess champion for kindergarten through third grade — beating out many players from elite schools with far more advantages and experience.“One year to get to this level, to climb a mountain and be the best of the best, without family resources,” Russell Makofsky, who oversees Tani’s school chess program explained to the New York Times. “I’ve never seen it.”

And the story doesn’t stop there. After Tani was profiled in the New York Times, the family was thrust into the spotlight. A GoFundMe raised $200,000 in a matter of days. Immigration lawyers offered pro-bono services to the Adewumi family to help them secure asylum. Elite schools are offering him full-ride scholarships. There are three film studios fighting over the rights to his life story.

The Adewumi family now has a modest two-bedroom apartment with a year’s paid rent from an anonymous donor. He’s decided to turn down the offers to prestigious schools for now and stick with the one that took a chance on him. “This school showed confidence in Tanitoluwa,” his mom, Oluwatoyin Adewumi, the school’s principal, according to the Times. “So we return the confidence.”

And that $200,000 GoFundMe? Tani is tithing 10 percent of it to the church that helped his family while they were homeless and the rest will go to other struggling African immigrants. “God has already blessed me,” Tani’s dad Kayode Adewumi told the Times. “I want to release my blessing to others.”

The U.S. Fails to Crack Gallup’s Ranking of the World’s Happiest 10 Countries