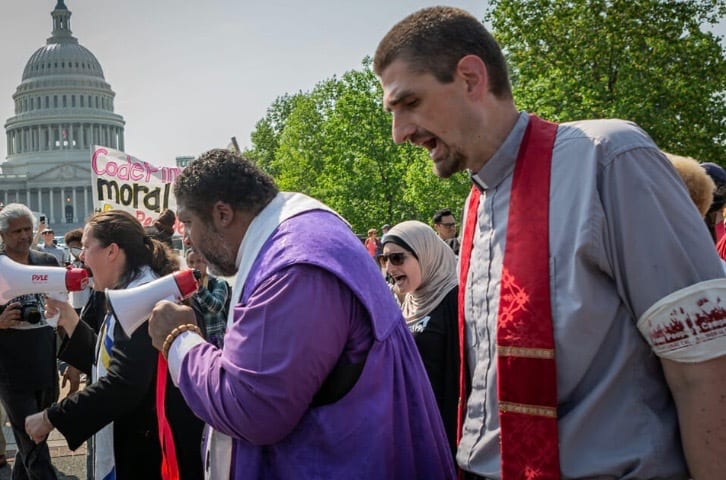 Last week, The Poor People’s Campaign began their 40 Days of Action, that includes protests, marches and other forms of action to bring attention to issues of systemic poverty and systemic racism in the U.S. The movement is a resurrection of the project that Dr. Martin Luther King, Jr. had begun just before being assassinated 50 years ago.

Writer and speaker Jonathan Wilson-Hartgrove is a prominent leader in the revived human rights campaign. His book Reconstructing the Gospel: Finding Freedom from Slaveholder Religion explores the theological underpinnings of the movement.

“The 40 days are really about trying to break through the public conversation about our common life, [to] get beyond the kind of headline news that seems to be driven by the president’s tweets and potential scandals and get down to these issues that are impacting poor people from healthcare to education to the criminalization of communities of color and homeless communities,” he told RELEVANT.

As the campaign continues around the U.S., RELEVANT spoke with Wilson-Hartgove about the ideology and importance of the campaign.

RELEVANT: Could you tease out the connections between this work and the gospel?

Wilson-Hartgrove: This is work Jesus did. And if we look at who was drawn to Jesus in the New Testament, it was the poor, the lame, the lepers, the women who had been ostracized because of their status. The prophetic tradition of Isaiah and Ezekiel and others who had spoken up for the poor and the children, that’s the tradition that Jesus claims when He gets up in the synagogue in His own hometown to give His first sermon. He says from Isaiah, the spirit of the Lord is on me to proclaim good news—that’s euangel in Greek, [literally] that’s “gospel”—to the poor. That’s Gospel. So Jesus’ proclamation to the Gospel is specifically good news to the poor. And we think that’s a central thread of the Jesus movement throughout history.

There was a very well-funded movement to co-opt Christianity for a slaveholder religion in the 19th century and that’s with us still. So we’re trying to break through that narrative that basically says, if you’re good, you’re doing all right (financially), but if you’re bad, you’re poor. That’s the narrative that’s out there. And it has different strands, there’s the prosperity version of it. There’s the Christian nationalist version of it, but it’s out there in our public lives.

Would you say they are the ideological barriers to the Poor People’s Campaign and how do you think we can get around them?

One of the ones for Christianity that I think is really crucial is the way the defenders of slaveholder religion justified their practice by spiritualizing the good that was being done to enslaved people. So they were saying it’s better for enslaved people to be here and hear the Gospel than to die and go to hell in pagan Africa. That was an argument they made. While no one makes that argument anymore, I do think that much of the evangelical movement was tainted with that false dichotomy between the well-being of the soul and well-being and justice of bodies. So that’s one that I think we have to go at.

This is fundamentally about using religion to prop up plantation capitalism. If you look at the 1930s when the money gets shifted to James Fifield, who was pastor of a congregationalist church out in L.A., his spiritual mobilization movement was all about tying Christianity and capitalism together. So the narrative of blaming the poor for their poverty, and saying that anything that challenges the capitalist system can’t be Christian because to be American is to be Christian and to be Christian is to be capitalist, that’s sort of what that whole movement tried to do and paid a lot of money to teach preachers to preach the text that way. That’s what the spiritual mobilization network was about, there were 19,000 pastors who were a part of that network (If you want to read more about this, it’s in Kevin Kruse’s One Nation Under God).

What he lays out there is how the corporations after the Great Depression didn’t have any credibility. They couldn’t make the case for capitalism in the public square so they did a survey to see who had credibility with the average American, and pastors had the highest level of credibility. So they invested their money in paying pastors to preach that God is a defender of private property and liberty as the individual’s right to keep their own stuff and keep the government out of it. All of that comes out of that movement.

So those are the kind of ideological structures I’m trying to name and to narrate how, as a matter of fact, the Scriptures are a direct challenge to these kinds of ideology. [I want to] to draw connections to how Jesus was organizing in the first century and how Jesus was trying to organize in that model today.

It seems like the Poor People’s Campaign incorporates a lot of different social injustices under the umbrella of poverty. Do you feel like poverty is the linchpin to a lot these social injustices and if so, how?

We think it’s important to name how the issues are connected because the concentrated wealth in this country, what they have invested in over the past 30-40 years is a political scheme that uses these, what are often considered cultural or social issues, to divide people who would have economic reasons to band together.

Originally it was about trying to maintain the division of race but it is no longer. You could no longer talk about it in racial terms after the Civil Rights Movement. George Wallace made it politically incorrect to say the N-word and appeal to white people that way. So the Southern Strategy said we will appeal to white people through cultural issues. So they started talking about “forced bussing” and “states’ rights” and “abortion” and “the gay agenda.” And all of these were attempts to pit people who were often quite poor—poor white folks in the south who go to their church every Sunday, [and] black folks who are also in church, [just] not the same church—against each other. But they would have had a lot in common, both in terms of their faith and their economic station if you didn’t find some way to pit them against one another.

This is something that Dr. King actually talked a lot about throughout his ministry. But one speech to go back and read is the speech that he gave at the end of the Montgomery march. When they get to Montgomery, he gives a speech where he kind of lays out the history of how the plantation economy was always built on keeping people pitted against one another. Because there were always more poor people than there were people in the big house. But they had to use race and Jim Crow [to divide the poor], and it’s been one issue after another to keep people who are poor divided.

So, our focus on poor people is just to say that people in this country have a lot more in common than the fewer and fewer people who are extremely rich would want them to believe.

One challenge to racial coalitions in justice work is the history of racial tension between those racial groups. How can move come together in a way that doesn’t just sweep that history under the rug?

That’s why we’ve said systemic racism and systemic poverty have to be held together. You can’t build a poor people’s coalition and pretend that race doesn’t matter, because there’s no way of understanding the history of poverty in this country apart from the labor and the land that were stolen from people based on race.

Bacon’s Rebellion is an early example in this country’s history on how poor people were considering coming together uniting against the Plantation Class early on. So those folks who wanted to hold on to their power and money had to find ways to pit white and black people against each other initially and really to justify their genocide of the native people based on race.

So that’s why we think all economic issues have to address race head-on. But we have to do that in a way that doesn’t demonize the poor white people, who have in many ways also been exploited. So we are very clear that we are organizing black, white, brown, red together in the deep South and places where race has often been used to pit people against one another. And that means you’re going to have awkward conversations. But we think it’s really worth doing that work to keep the issues out front to let people hear one another’s stories and to work through the real tensions that are there because of our shared history of being really divided.

Jimmy Carter at Liberty U: Discrimination Against Women Is the World’s Greatest Challenge