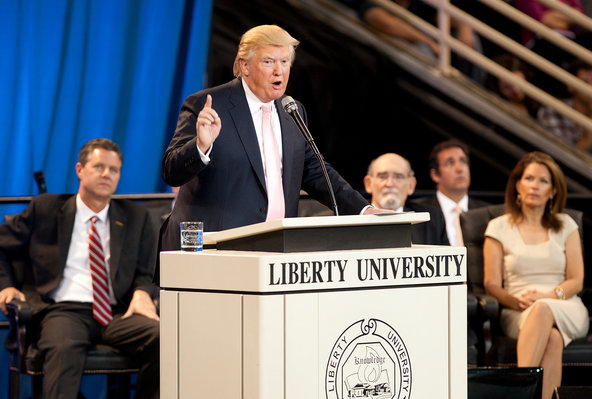 It was not altogether surprising that President Donald Trump will be Liberty University’s graduation speaker. Trump and Liberty University President Jerry Falwell were thick as thieves during the presidential campaign, and Falwell reportedly even politely declined a job offer from the Trump Administration.

What is surprising is that instead of pulling out the protest signs and megaphones, local Lynchburg VA protestors have announced that they will instead be organizing a “Day of Action” full of volunteer opportunities for community service. As the Lynchburg Democratic Committee explained to The News and Advance:

Rather than waving signs at grandparents attempting to get onto campus, we will be planting flowers, painting and picking up trash elsewhere in the city. We will take our emotions, our energy and our protest to communities most likely to be hurt by the actions of this federal administration …Graduation is not about the speaker. Graduation is a day to celebrate the hard work, sacrifices, and educational achievement of students. It is their day to celebrate with their families.

The letter also addressed local Lynchburg residents who may still feel the need to protest by appearing to sincerely ask whether or not it would do any good: “Is your message reaching the intended target?” asked the letter to the editor. “Are you supporting education? Will your actions reflect your values? Are you actually making a difference?”

These aren’t necessarily rhetorical questions, but they are ones anyone putting together a protest sign for any event should be able to answer. And until you get them answered, a little time spent volunteering sure couldn’t hurt.

U.S. Strike in Mosul May Have Killed As Many As 200 Civilians

What We Can Learn from Demi Lovato’s Fight for Sobriety